Trains to The Isle of Wight

The Isle of Wight is famed for its gorgeous beaches, spectacular scenery, outdoor activities, festivals, and of course, its charming seafaring villages full of character. But did you know you can travel to the Isle of Wight with us? That’s right, you can book both train and ferry tickets (or even hovercraft tickets!) at the same time through us, so get ready for amazing UK staycations and day trips made easy and stress-free. With your combined train and ferry tickets to the Isle of Wight all in one place, you can forget everything else and simply enjoy the journey.

How to get to the Isle of Wight from London

London to the Isle of Wight by train can be an incredibly scenic journey, especially if the weather is on your side. The popular London Waterloo to Yarmouth Ferry Terminal route takes you to Brockenhurst railway station first via a South Western Railway service. You’ll need to make a quick change there before boarding another South Western service to complete your journey down to Lymington Pier railway station on the South English coast. From Lymington, a ferry operated by South Western Railway will take you on to Yarmouth.

How to get to the Isle of Wight by hovercraft

To get to the Isle of Wight by the world’s only commercial hovercraft service, choose "via Southsea Hoverport” in our Journey Planner. Leave your train at Portsmouth & Southsea station, then hop on the regular shuttle bus to the Hoverport. Once checked in you’ll fly across the Solent on a cushion of air - just ten minutes to Ryde Esplanade. There you can pick up an Island Line train or buses for onward travel across the island.

With only one change, the route from London Waterloo to Ryde Pier Head is a great alternative, especially if you’d prefer to start your Isle of Wight journey on the East side of the island. The train first takes you to Portsmouth Harbour railway station, where you’ll change for a South Western Railways-operated ferry on to Ryde. If travelling from London, it’s worth noting that the journey to Ryde Pier Head is often the cheapest option, and relatively quick to boot. Please also bear in mind that Ryde Pier Head is an offshore station located at the end of Ryde Pier, so you can either make your way to dry land by foot or catch an Island Line train on to Ryde Esplanade station.

Another option is the London Waterloo to West Cowes route, which again is operated by South Western Railway. This route requires two changes, the first being at Southampton Central railway station. Once there you can hop on a bus or take a slow stroll through the town on foot towards Southampton Town Quay, where your connecting ferry service will take you onwards to West Cowes.

How to get cheap Isle of Wight train tickets

Things to do on the Isle of Wight

There’s plenty to see and do once you reach the island. If your outward journey concludes at the quaint harbour town of Yarmouth in the North West, it’s well worth checking out Yarmouth Castle, which you’ll get a great view of as your ferry pulls in to its terminal. From there, our top tip would be to head to the Western-most point of the island to visit the extraordinary Isle of Wight Needles. An iconic natural landmark, ‘The Needles’ are a set of three unique chalk formations emerging from the sea, given their name due to their slim and pointy appearance. From the nearby Alum Bay, you can get an excellent view of the Needles by hopping on a chairlift up from the beach to the top of the cliffs, a ride that might not be for the faint of heart!

If you plan to take in the whole of the island in one trip, you can then head east to Newport (there are plenty of bus services operating from Yarmouth to various parts of the island), where you can visit the medieval Carisbrooke Castle. You can also take the kids to Monkey Haven, a wildlife and safari park that offers the chance to get up close and personal with some very excitable critters. East of Newport on the coast lies the fantastic Shanklin Beach, a real bucket and spade hotspot for visitors to the island. Enjoy the sandy shores and the typical promenade of attractions accompanying them, from ice cream vans to chippy shops and mini-golf games.

Another stunning beach is Priory Bay Beach, a hidden treasure boasting crystal-clear water and golden sands surrounded by rocks. Want to learn more about it? Check out our guide to the best beaches near London to reach by train.

Planning your next family holiday in the UK and not sure where to go? Check out our guide to the best family staycations in the UK, the Isle of Wight is one of them! 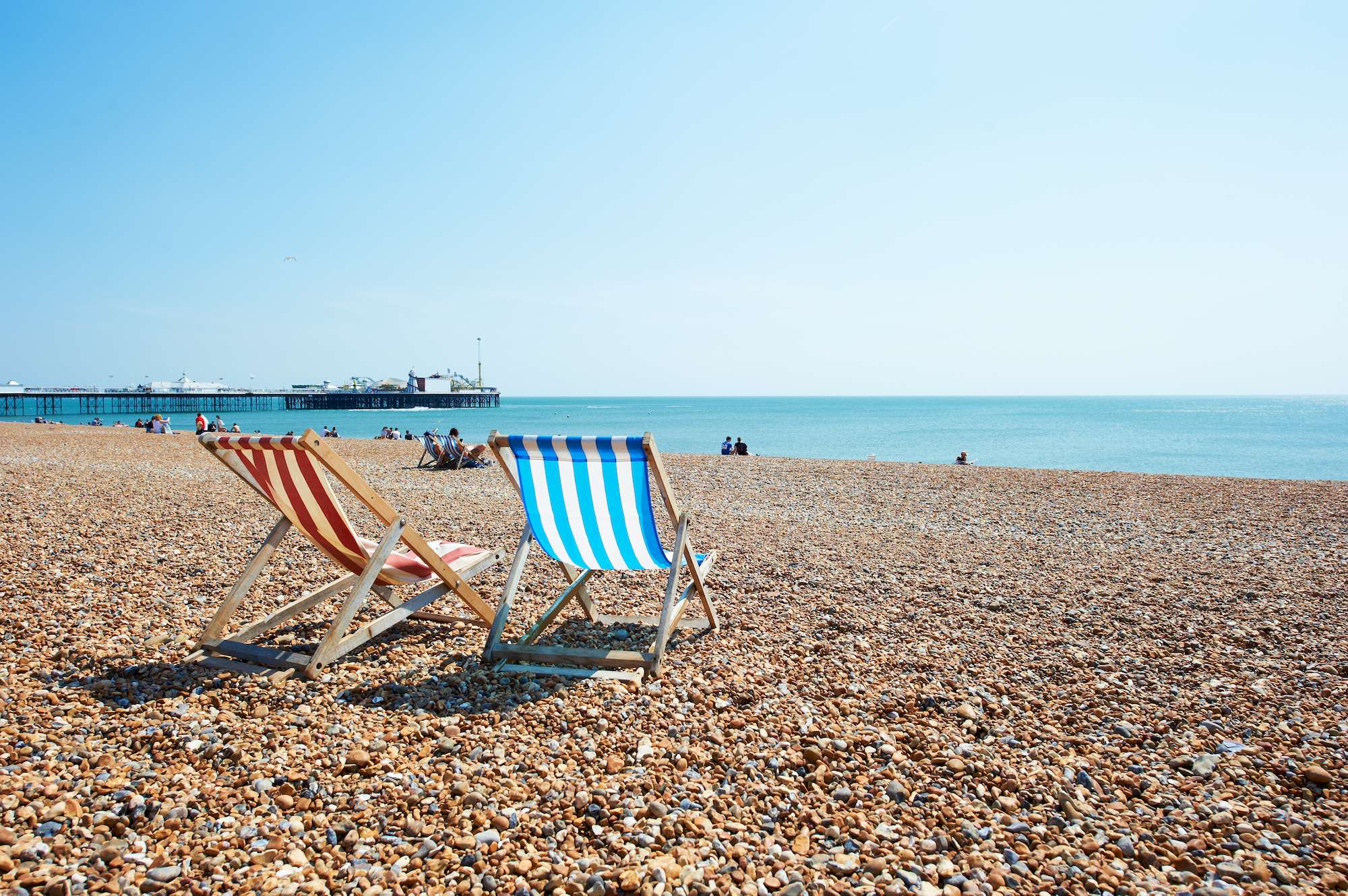 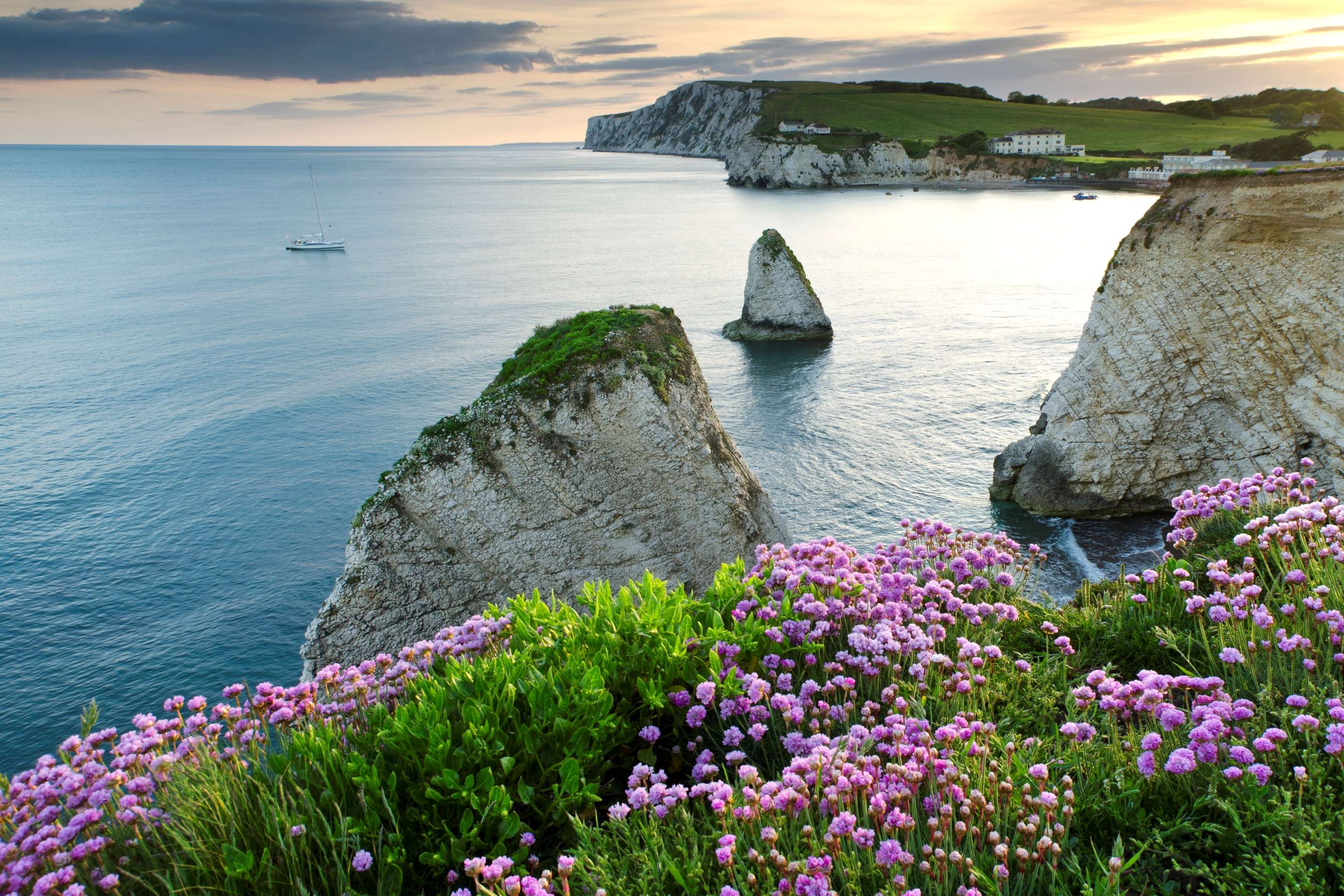 Day trip to the Isle of Wight

Trains on the Isle of Wight 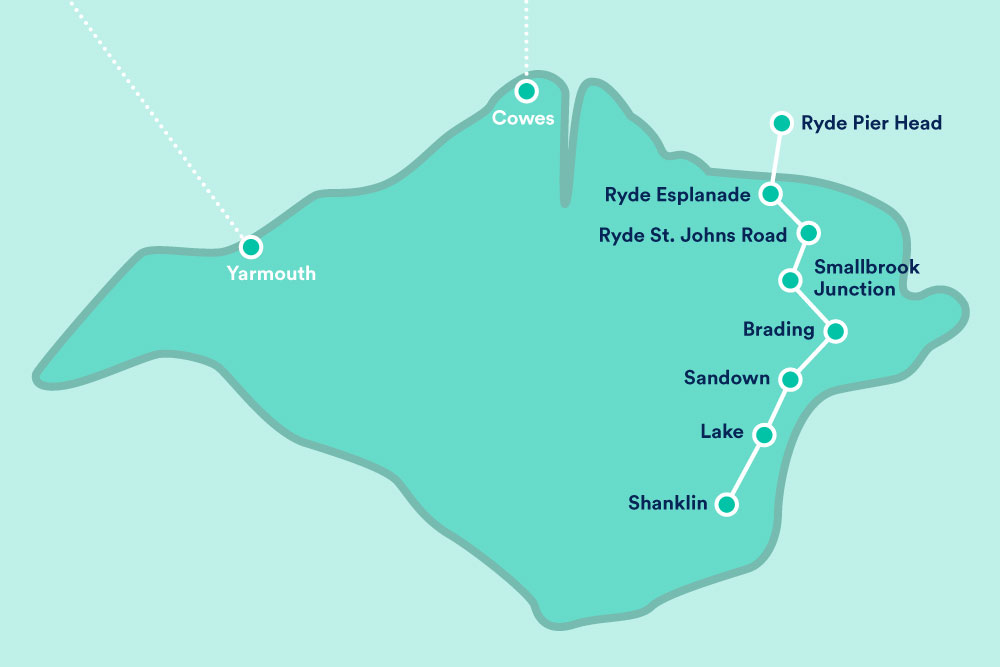 It features just eight stations and takes passengers on a cheerfully short jaunt from Ryde Pier Head to Shanklin – a great way to explore the Island stop by stop or to make your way straight to the beach. Some of the trains operating on this line are former London Underground trains, some of which date back as far as 1938. From May 2021, the entire fleet will have been replaced by re-furbished District Line trains, fitted with USB charging ports and WiFi.

There are just five trains in the entire fleet – compare that to the 99 trains in CrossCountry’s fleet! But the Island Line serves the Island’s purposes just fine – serving the popular beach-side towns and resorts on the east side.

For more information on the eight railway stations on the Island, including live departures, visit our station pages:

We also can’t talk about the island without mentioning its steam train – a must for any avid train fans. The gorgeous Isle of Wight Steam Railway route takes passengers from Smallbrook Junction to Wootton, stopping at two stations along the way, and is not to be missed.

How can I get cheap train tickets to the Isle of Wight?

It's easy to grab yourself cheap train tickets to the Isle of Wight. We’d recommend using a Railcard, buying your ticket in advance or travelling during Off-Peak hours if you can.

Are trains running to the Isle of Wight?

How long does it take to get to the Isle of Wight by train?

Can I use my Railcard to save up to 1/3 on my trip to the Isle of Wight?

Yes, there are several types of Railcards you can use to save up to 1/3 on your trip to the Isle of Wight, these include: