Take the train to Glasgow and discover Scotland's biggest city. There are direct services to Glasgow from almost all of Scotland and England's major cities — travel from London to Glasgow in 4h 29m, Manchester to Glasgow in 2h 58m and Edinburgh to Glasgow in 1h 5m. Use our Journey Planner to search for train tickets and journey times — we'll always highlight the cheapest tickets to Glasgow, helping you save on travel.​

Brimming with personality, Glasgow is Scotland's urban culture capital. Packed with music venues, museums & galleries, historic buildings and phenomenal shopping, Glasgow is great fun. Anybody who knows the city will tell you that Glaswegians are some of the friendliest people around. See the architecture of Charles Rennie Mackintosh, ease back at trendy hangouts like Ashton Lane or stroll the colourful halls of Kelvingrove Art Gallery in this city of culture.

How to find the cheapest train tickets to Glasgow

Getting your hands on cheap train tickets to Glasgow is easier than you might think. With our top tips, you could save some of that hard-earned cash on rail travel and spend it exploring Scotland instead. Follow our instructions below, and you’ll be on your way!

Our top tips for finding cheap train tickets to Glasgow:

First up, consider using a Railcard to get cheaper train tickets to Glasgow. You only have to buy one for the whole year, and it can get you up to 1/3 off the price of your tickets*, so it’s a win-win purchase! There are different types available, including the popular Two-Together Railcard, but you can see which ones might apply to you by visiting our Railcards page. Railcards cater to different age ranges and circumstances so, from the Senior Railcard to the Disabled Persons Railcard and the newly-introduced 26-30 Railcard (Millennial Railcard), you'll be sure to find your match.

2. Book tickets to Glasgow in advance

When you search for tickets in our Journey Planner, make sure that you’re booking well in Advance. In a lot of cases, you can secure cheaper train tickets by booking up to around three months in advance. This is because train companies usually release their tickets 12 weeks before the departure date, and prices can increase thereafter. Don’t worry though! You can sign up to our handy Ticket Alerts service, and we’ll email you as soon as tickets go on sale for your preferred route.

For a complete guide, including rules and restrictions, head over to our Advance train tickets page.

You can also increase your odds of securing the cheapest train tickets to Glasgow by travelling at Off-Peak times. Why not book your Advance ticket for an Off-Peak time and add your Railcard for a super money-saving combo?

Get more info on benefits, rules, and restrictions by visiting our Off-Peak train tickets page.

Before you confirm your ticket booking, it can be worth comparing the prices of two Single tickets vs a Return journey, as on rare occasions one method may be cheaper than the other. On top of this, try selecting a specific Glasgow station as opposed to ‘Glasgow, any’ in our booking widget and look out for any price differences.

Are you travelling to Glasgow in a group of three to nine people? If so, make sure to apply the GroupSave discount to your booking! Simply select GroupSave from the Railcard dropdown when booking tickets for the whole group and you could save as much as 34% on the total fare! Please bear in mind that GroupSave is not applicable for all journeys by the different train companies and will automatically be applied if valid for your journey and selected in the Railcard dropdown. All tickets must be purchased in a single booking, and all passengers must travel together on the day of departure.

*Conditions and peak travel time exclusions may apply on some railcard types.

London to Glasgow on the West Coast Main Line

The fastest trains from London to Glasgow take just 4h 30m to complete the journey, with no changes. Services to Glasgow run along the West Coast Main Line (WCML) – one of the primary railway lines in the UK, connecting London to the West Midlands, North West and Scotland.

Departing from London Euston, you’ll take an Avanti West Coast service direct to Glasgow Central station. Avanti run a mix of Class 390 Pendolino and Super Voyager locomotives on this route. Pendolinos are the flagship trains in Avanti’s fleet – they’re quiet, comfortable and fast – but Super Voyagers are equally as comfortable. There is luggage storage at the ends of carriages and above seats. First Class is extra-spacious, with plug sockets at every seat and an at-seat meal service. You can view First Class menu on Avanti’s website. 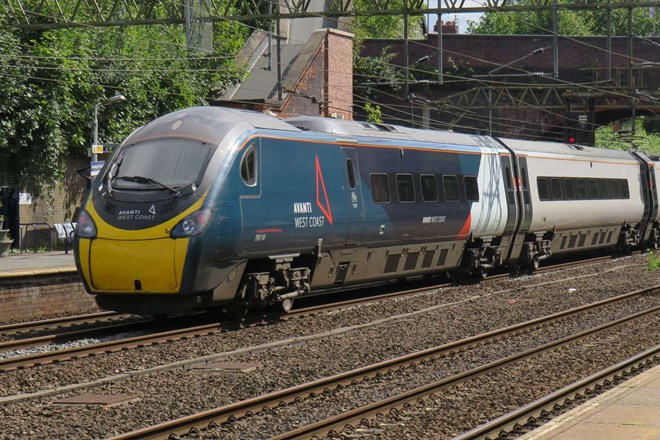 It's easy to travel to Glasgow by train from all over the UK, including direct routes from some of the country's biggest cities like London, Birmingham and Manchester. Most trains to Glasgow arrive into the city's two main railway stations, Glasgow Queen Street and Glasgow Central. We've highlighted some of the most popular routes below, or you can start your search from any UK destination in our Journey Planner at the top of the page.

Glasgow is Scotland’s largest city and an action-packed destination for a day-trip, a night out or a city break. Good transport links mean that whether you’re arriving from London, from Manchester or from Aberdeen it won’t be long before you’re out sightseeing.

Cultural hotspots include the fascinating Kelvingrove Art Gallery & Museum – one of Scotland’s most popular free attractions, and the Glasgow Science Centre in Pacific Quay. On the South Side of the City, visitors will find the world-famous Burrel Collection in the lush surroundings of Pollok Country Park.

Many people arrive on trains to Glasgow to go shopping along the city’s Style Mile. Here you can explore chic boutiques in Princess Square, The Buchanan Galleries and the upmarket St Enoch Centre. Don’t miss out on the city’s vibrant music scene – celebrated venues like King Tut’s, Òran Mór and the SEC know how to put on a show.

The main train station in Glasgow is Glasgow Central, located in the city centre. Depending on where you’re travelling from, you’re likely to arrive into Glasgow Central or Queen Street – the other stations in the city.

There are a number of trains companies in the UK that operate trains to Glasgow, including LNER, ScotRail, Avanti West Coast.

How can I get cheap train tickets to Glasgow?

Are trains running to Glasgow?

Trains run frequently almost every day to Glasgow, although there may be less services during the weekends and bank holidays. Check our live train times for up-to-date information on trains to Glasgow.

Can I use my Railcard to save up to 1/3 on my trip to Glasgow?

Yes, there are several types of Railcards you can use to save up to 1/3 on your trip to Glasgow, these include: