Welcome to one of Britain's most celebrated historic cities, shaped by Roman culture, Viking invaders and medieval kinds, and blessed with a world-famous religious building in York Minster. The exceptionally well-preserved old town has retained its character without becoming stuck in the past - day-trippers and holidaymakers alike flock to York for modern shopping, dining and culture in the winding, characterful streets. With great connections both north and south, it's the perfect place for a UK rail break.

Trains running on the London to York route will soon be replaced by a new fleet of high-spec Azuma trains, operated by London North East Railway (LNER). For more information, visit our Azuma trains page.

How to find the cheapest train tickets to York

Are you looking for cheap train tickets to York? Well, there’s good news! There are several convenient methods you can use to save money when making a booking. Whether you’re travelling to the Chocolate City on business or to explore and take in the sights, we’ll share our top tips for knocking the pounds off your rail fares.

Our top tips for finding cheap train tickets to York:

One of the first things you’re going to want to do is purchase a Railcard. Before you baulk at the (relatively low) price, consider that if you travel to York or other locations by train more than a couple of times a year, you’ll often be able to save up to 1/3 off the price of your train tickets*. Visit our Railcards page to purchase your own and to see eligibility requirements for the various cards available. Railcards cater to different age ranges and circumstances so, from the Senior Railcard to the Disabled Persons Railcard and the newly-introduced 26-30 Railcard (Millennial Railcard), you'll be sure to find your match.

2. Book tickets to York in advance

To help secure cheap train tickets to York, you should also try to book your tickets as far ahead in advance as possible. Often, the sooner you buy an Advance ticket, the cheaper it’ll be. Many train companies release their tickets 12 weeks in advance, although some can even go as early as 24 weeks. You can sign up to our handy Ticket Alerts tool that’ll let you know when Advance train tickets become available for your preferred route, saving you valuable time.

By booking your Advance train ticket for an Off-Peak time, you’ll be increasing your chances of securing cheap train tickets to York. Off-Peak trains only allow you to travel at certain times of the day or the week, providing good value for money. If you then combine your Railcard discount with your Off-Peak train ticket, you’ll notice that the money you’re paying for rail travel drops off considerably.

For more details, check out our Off-Peak train tickets page.

Also, make sure to check that your Return tickets are cheaper than two Single tickets before you book. Sometimes, one method may be cheaper than the other.

Finally, rail customers travelling in groups of three to nine may be able to get discounted tickets. Perfect if you’re going on a family trip or heading to York with friends, you could save up to 34% thanks to GroupSave, a type of discount that you can apply to your tickets in the Railcard dropdown if you book for the correct amount of people. Please bear in mind that GroupSave is not applicable for all journeys by the different train companies and will automatically be applied if valid for your journey and selected in the Railcard dropdown. All tickets must be purchased in a single booking, and all passengers must travel together on the day of departure.

For even more hints on how to save money on your rail fares, check out our cheap train tickets page.

London to York on the East Coast Main Line

Trains from London to York are operated by London North Eastern Railway, who run services on the East Coast Main Line (ECML). All services depart from London Kings Cross, calling at several major stations on the ECML – including Doncaster, Newcastle and Edinburgh.

The fastest services take just 4h 20m to reach York station – the city’s main railway station. You’ll travel on an Azuma train. These are LNER’s high-speed, modern trains capable of speeds of 125 mph on the East Coast Main Line. Free WiFi comes as standard and all seats have access to power sockets.

If you want to travel in comfort from London, consider upgrading to First Class. When booking just a day or two ahead, upgrading to First Class can cost as little as £10 more than Standard Class tickets. You’ll enjoy reclining seats, extra space, morning papers brought to your table and a complimentary menu. LNER are currently offering fewer options on their menu as catering is phased back in to the service. 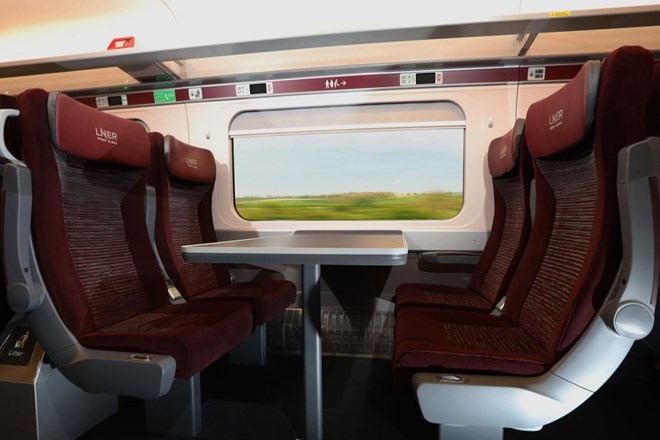 How to find cheap tickets from London to York

The cheapest tickets from London to York are Advance Singles. These usually sell out ahead of time, but on quieter services, there are still Advance Single tickets available up to the night before departure. Super Off-Peak are the next cheapest ticket type. The Super Off-Peak window for this route usually falls between 11:00 and 15:00, so if you can spare the time to travel in the middle of the day, you can make big savings. These discounted tickets can be available the day before travel or even on the day, so you don’t always have to book weeks in advance to find the cheapest fares.

Railcards can also save you a third on trains to York from London. You can buy digital Railcards online with us and store them in our app – so you can do away with those easily-forgettable paper Railcards.

You know York is a historic city as soon as you step out of the station. A portion of the Roman city wall lies directly opposite the forecourt and leads northwest through the serene Memorial Gardens to the River Ouse. On the opposite bank are the Museum Gardens, home to the Yorkshire Museum and the ruins of St Mary’s Abbey; and it’s a short walk from there to the great York Minster, with its Gothic façade and famous Great East Window.

In the city centre, wander through The Shambles, a warren of narrow, atmospheric streets filled with independent shops and cafes, and see the history of York brought to life at the Jorvik Viking Centre and the York Castle Museum, which delves into the city’s later golden age with hands-on exhibits and a recreated Victorian street.

When it’s time to eat, you’ll find a range of award-winning restaurants, charming cafes, and traditional pubs – and you can indulge your sweet tooth on the York Chocolate Trail, discovering the surprising role chocolate has played in the city’s history. In fact, York is often called the "Chocolate City" has been home to two household names, Terry's and Rowntrees.

Back at the station, don’t miss the National Railway Museum, packed with famous engines like the Flying Scotsman and the Mallard, as well as railway posters and vintage photos.

How can I get cheap train tickets to York?

It's easy to grab yourself cheap train tickets to York. We’d recommend using a Railcard, buying your ticket in advance or travelling during Off-Peak hours if you can.

Are trains running to York?

Trains run frequently almost every day to York, although there may be less services during the weekends and bank holidays. Check our live train times for up-to-date information on trains to York.

How long does it take to get to York by train?

Yes, there are several types of Railcards you can use to save up to 1/3 on your trip to York, these include: