Looking to travel to the northeast of England or Scotland? You’ll find yourself on a brand-new Azuma train, operated by London North Eastern Railway (LNER).

At Trainline, we’ll provide you with the best fares for Azuma trains, making it simple for you to book tickets and pay with confidence.

What are Azuma trains?

Azuma is the name for a new fleet of diesel-electric hybrid trains run by London North East Railway (LNER) which formally entered commercial service on 15 May 2019.

Azuma trains run on the East Coast route from London King’s Cross to the North East of England and to Aberdeen and Inverness in Scotland.

Azuma trains use technology from the Japanese bullet train, making journeys faster and quieter. ”Azuma” means “East“ in Japanese – the name is a homage to the fleet’s Japanese technological roots.

LNER plans to replace the current 45-strong fleet operating on the East Coast route with 65 Azuma trains. You can reach Lincoln, Leeds, York, Newcastle and Edinburgh on Azuma trains, while services to Aberdeen and Inverness are being rolled out across November and December 2019.

Southbound services terminate at London Kings Cross. The timetable lists Azuma services only. There are plenty more regular LNER services running on these routes throughout the day, but they will not use Azuma trains. So, if you want to travel on Azuma, make sure you book one of the trains listed!

Keep in mind that these times are for weekday services. Azuma timetables differ on the weekend - use our Journey Planner to book weekend travel.

Northbound Azuma services begin at London Kings Cross. There is a section of the station dedicated to LNER trains with LNER staff on hand to help you catch the right train. Bear in mind that the timetable only lists Azuma services - there are plenty of other daily trains from Kings Cross.

For routes north of Edinburgh, you'll be able to order from a special menu which celebrates Scottish culinary heritage!

Wondering what First Class is really like? Here’s a peek into the inside of an Azuma First Class carriage from one of our trusted travel writers, Freddie Larkins.

Like most rail travellers, I spend most – if not all – of my time in Standard Class, so to be invited for a First Class journey on Azuma’s maiden service from Lincoln to London was a real treat! Safe to say, Azuma didn’t disappoint.

The interior of the First Class carriage was spacious and comfortable. Seats were arranged in a 2+1 formation, with single seats lining one side of the carriage and tables of four lining the other side. The seats were lined with felt, not the leather that you’ll sometimes find in continental First Class carriages, but they were comfortable nonetheless. I was in a single seat and had plenty of legroom – that’s coming from someone who usually has to stick their legs out into the aisle to sit comfortably.

The service on board was top notch. The service staff were on hand as soon as we set off, offering free tea and coffee. Orders for lunch were taken shortly after departure. Each passenger is given a glossy ‘Let’s Dine’ menu on their folding table; we ordered from the ordinary Rest of Day menu, but there’s also a special menu for journeys north of Edinburgh.

I opted for the chicken casserole for lunch. The food is served on proper crockery with metal cutlery, no paper plates in sight! Complimentary alcoholic drinks were served alongside the main, also in proper glass. The portion sizes are about what you’d receive a long-haul flight; not massive, but enough to fill me up. The meal was capped off with a lemon posset for dessert.

The journey itself was pleasant. Azuma trains were built by the same firm that designed the Japanese Bullet Trains, so they’re quiet even at high speeds. I could tap away on my laptop undisturbed. The train arrived into London Kings Cross at 13:23, making for a journey time of just over two hours. 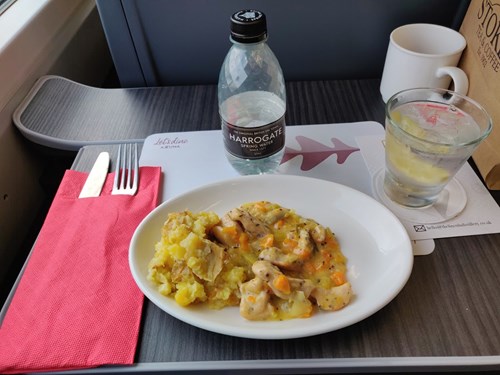 LNER plans to roll out Azuma services running beyond Leeds and Hull later in 2019 - we'll keep you updated as they do.

Can I take a bicycle on an Azuma train?

Yes – but make sure you book in advance! Azuma trains are equipped with special compartments for storing bicycles. All bikes must have a reservation – spaces are limited, so book early! Folding bikes can be stored alongside bags on luggage racks. There are eight bicycle spaces on a nine-coach train and four spaces on a five-coach train.

Yes. Each 9-coach Azuma train has four wheelchair spaces – two in Standard Class and two in First Class. They are adjoined by two companion seats. As with the rest of the seats on the Azuma, wheelchair spaces have power sockets to hand.

Are pets allowed on the train?

Furry friends are welcome on-board Azuma trains! You’re allowed up to two small animals with you, provided they are not taking up an extra seat. Each extra animal after the first two will cost £5.

Is there WiFi on Azuma trains?

When will Azuma trains start running?

The first Azuma train officially entered service on 15 May 2019, running from London King’s Cross to Leeds. LNER has also replaced its daily service to Hull via Selby with Azuma trains.

Over the coming months, LNER will roll out Azuma services on routes to the North East of England and Scotland – they’ll be announced as they are decided. By the end of 2019, there will be more services from Lincoln and Harrogate to London.

By December 2021, LNER plans to run regular services between London and Scotland. Azuma will whisk passengers from London to Edinburgh in just four hours, with regular journeys from London to Leeds – taking only two hours – also becoming typical throughout the day.

How fast will Azuma trains travel?

The train can reach a maximum speed of 225 km/h but is limited to 200 km/h while travelling.

Are Azuma trains electric or diesel?

Both. Equipped with “bi-mode” technology, Azuma trains can switch between electric power via overhead electric wires and diesel power. Most of the time, the trains will run on electricity, but the diesel engine will kick in when required - where there are no power cables available, for example. Azuma's top-spec engine will filter out harmful emissions by 90% compared to existing high-speed train engines, making for a quieter journey.