For travel advice and what to do if plans change, visit our booking info page

Harrogate railway station dates back to 1862. Originally designed by the architect Thomas Prosser, the station was the first structure in Harrogate built of brick, but in the 1960s, it was largely torn down and replaced by the existing, more utilitarian building. In the summer, pretty flowerbeds and hanging gardens around the station nod to the town's famous Harlow Carr Botanical Garden.

Trains to Harrogate arrive right in the centre of town, with the main attractions within a few minutes' walk. Harrogate's Turkish Baths and Health Spa have been offering visitors much-needed respite since the 1800s, and The Royal Pump Room Museum, in its grade II listed building, explores the history of what some consider to be England's premier spa town. For food, a good bet is Betty's Tearooms, the town's queen of finger food located in the illustrious Montpellier Quarter, the Antiques and Art Centre of the North.

Need more information on how to get to Harrogate by train? Check out our dedicated page to trains to Harrogate.

Want to know when your next train from/to Harrogate station departs? Scroll down this page and click on the ‘Departures’ tab if you want to check all trains departing from Harrogate railway station or click on the ‘Arrivals’ tab for more information about all services arriving into Harrogate.

Harrogate train station has three platforms, of which only platforms 1 and 3 see regular use. Platform 1 (towards York and Knaresborough) is situated directly outside the main ticket office, which also contains a small shop, refreshments, photo booths and ATMs. Platform 3 (towards Leeds) can be accessed via a footbridge and lifts from platform 1, or directly via the car park on the east side of the station, off East Parade.

Harrogate station also has an accessible waiting area for all passengers, complete with power points and USB charging sockets. 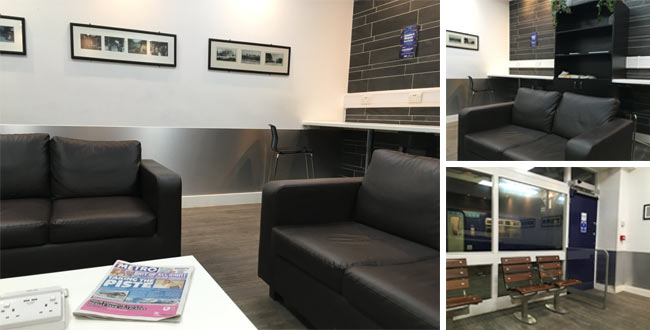 Harrogate train station has two car parks: Car Park 1 can be found near the ticket hall off Station Parade, while Car Park 2 is off East Parade. Both car parks have step-free access to help wheelchair users easily get to the station.

Looking for a hotel near Harrogate railway station? There’s a wide range of hotels you can choose from. Simply click on the button below and book now your accommodation in Harrogate.

Harrogate station is open every day that services are running to and from the station. The station usually opens just before the first train of the day leaves and then closes after the last train departs. Ticket office opening hours may vary.

Trains arrive into and depart from Harrogate station almost every day, although there may be fewer services during the weekends and bank holidays. Check our live train times for up-to-date information on trains running to and from Harrogate.

Are there toilets at Harrogate station?

Yes, there are toilets available to use at Harrogate station.

Are dogs allowed at Harrogate station?

Yes, dogs are allowed at Harrogate station, but they should be kept on a lead or in a pet carrier at all times.

Departures and arrivals from Harrogate

Want to check the latest departures and arrivals into Harrogate station? Find live information for the next trains departing and arriving at the station below.
See more departures from Harrogate
See more arrivals to Harrogate

We want to make travel easier for you, which is why we’ve compiled a selection of useful travel tips to help you on your way. Simply click the below tips to find out more.

Travelling with a bicycle

Travelling with a bicycle? Read our handy article to find out how to travel by train with a bike.

Find out more about travelling Europe by train with an Interrail pass.
†Average savings on fares booked prior to day of travel vs full price fares on day of travel in the UK. Subject to availability. Excludes coach.