With some of the most beautiful beaches in the UK, Norfolk is the perfect destination for your summer holiday. From Cromer Beach to Lowestoft South Beach, here are our top 5 Norfolk beaches you can reach by train: 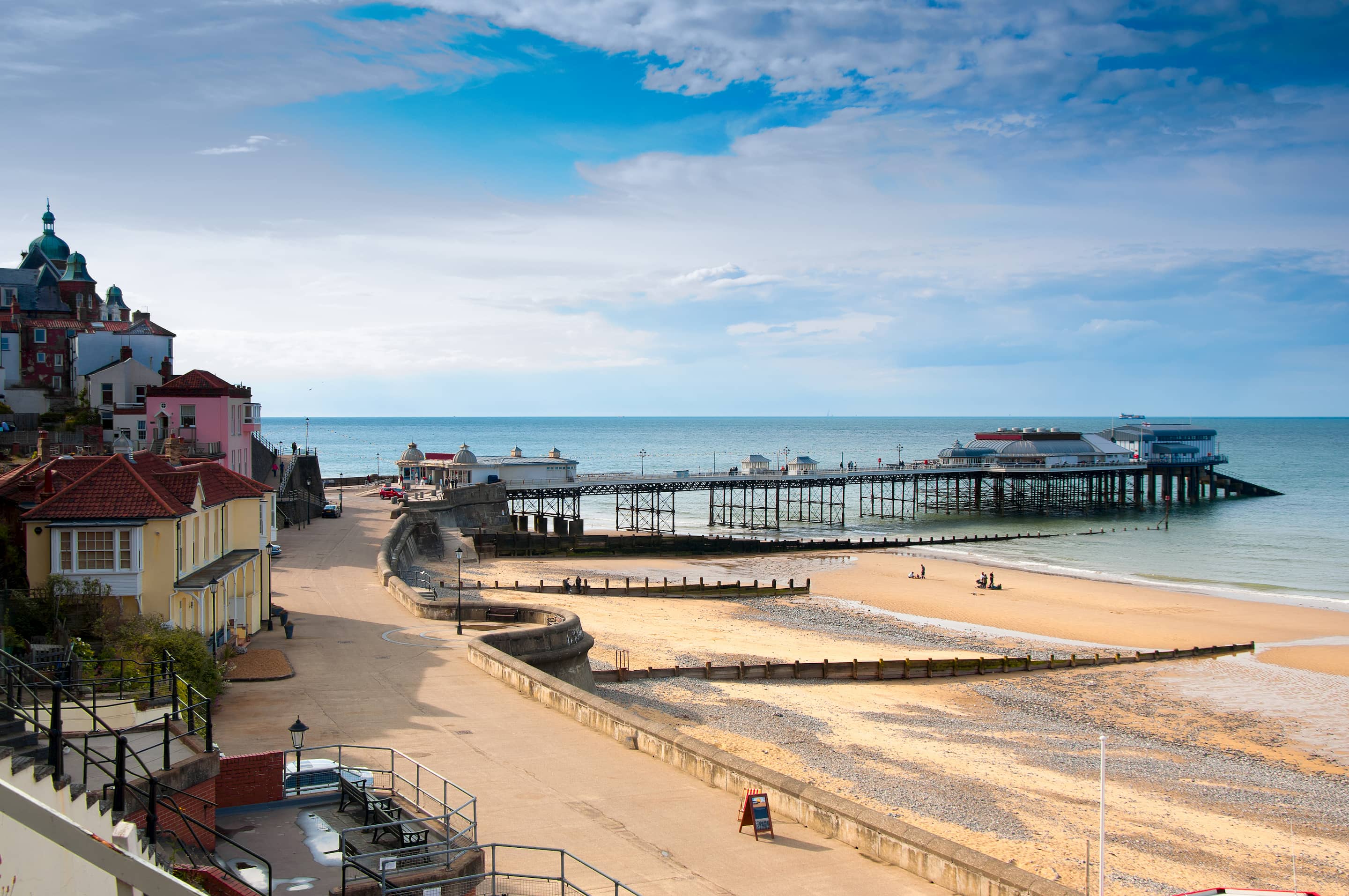 Finally, make sure you stop by the Pavilion Theatre on Cromer Pier for some annual summer and winter shows, and don’t forget to sample a delicious crab sandwich!

Getting to Cromer Beach by train

You can easily get to Cromer Beach by train. Frequent and direct Greater Anglia services connect Norwich to Cromer (39m) and Sheringham to Cromer (6m) every day. If you’re travelling from London, you’ll need to make one quick change (usually in Norwich) before getting to your destination – the total journey takes about 2h 30m.

Getting off at Cromer station, you’ll be only a few minutes away from the beach, what’s not to like? 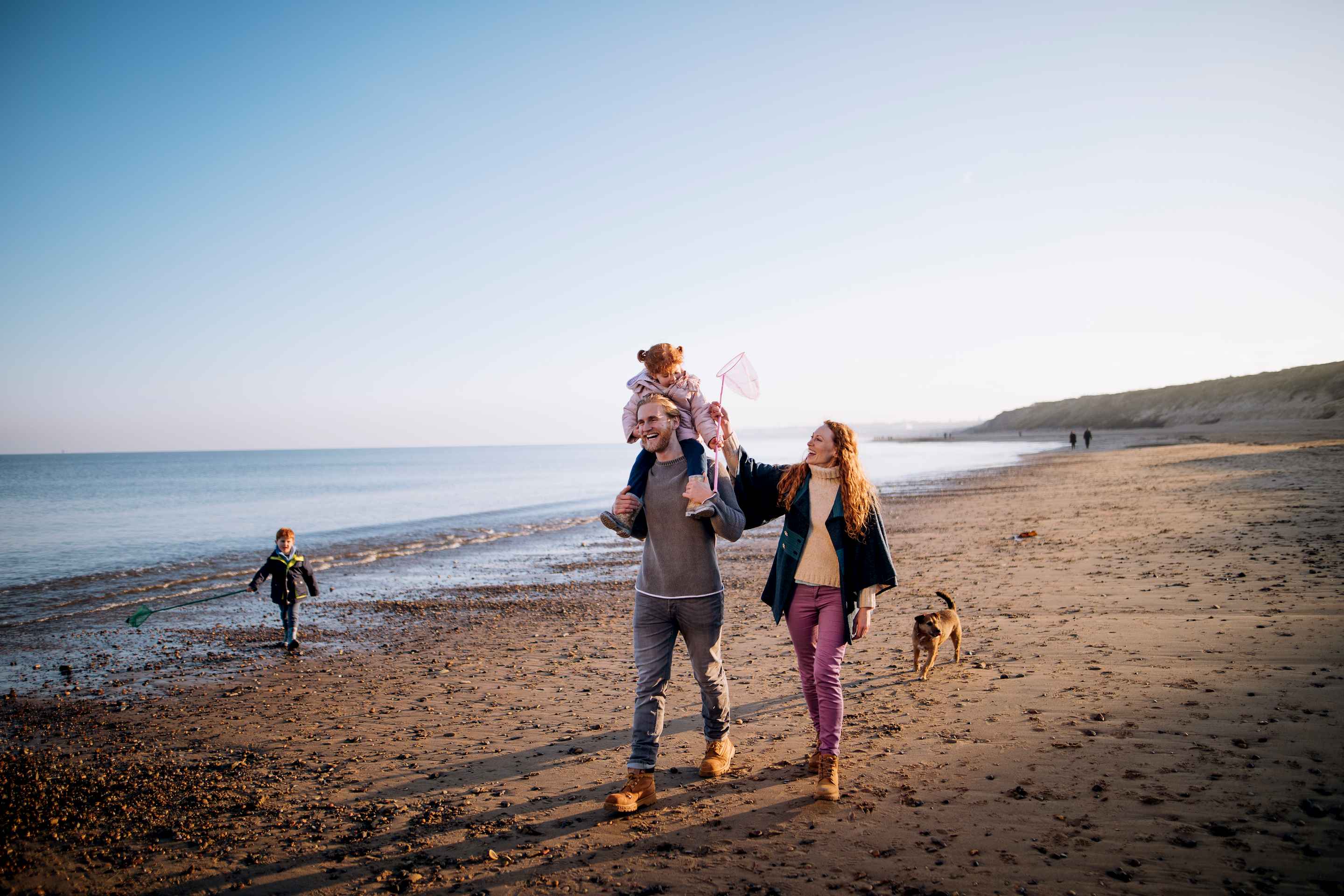 Another Blue Flag beach, Sheringham Beach is made up of sand, shingle and cobbles and can look quite different depending on tides. When the tide is in, the beach is a bit rocky, with lots of pebbles but when the tide is out, there’s plenty of sand to build sandcastles. You can also do rock pooling by the boulders.

Have a wander around the town’s many alleys and courtyards and discover hidden shops, restaurants and pubs for a beer and some delicious fish and chips.

If you’re a rail enthusiast, why not take a trip on the North Norfolk Railway, one of the most scenic heritage railways in the UK – it has been running steam and diesel trains between Sheringham and Holt since 1887 and promises amazing views.

Getting to Sheringham Beach by train

You can easily reach Sheringham Beach by train. Direct services operated by Greater Anglia run from Norwich to Sheringham in less than an hour. If you’re travelling from London, you’ll need to make one quick change along the way (usually in Norwich) before reaching Sheringham – the total journey is about 2h 42m.

Getting off at Sheringham station, you’ll be within walking distance from Sheringham Beach, ready to soak up the sun. 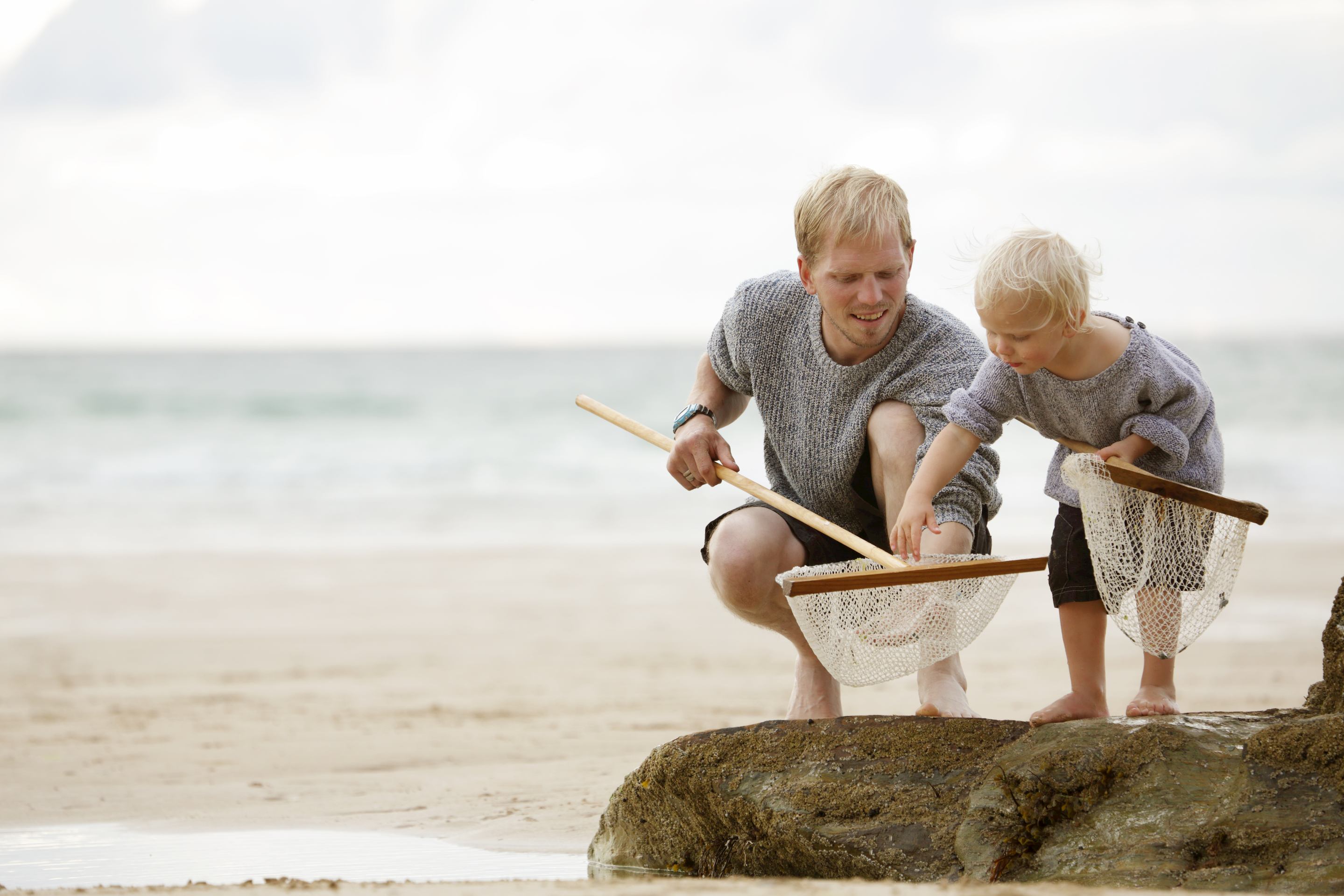 Next up on our guide to the best Norfolk beaches to reach by train is West Runton Beach, a sandy and shingle beach that reveals a hidden landscape with rock pools, clay and chalk formations when the tide goes out. We recommend you go beachcombing for some interesting finds.

The cliffs offer an impressive backdrop to this beautiful Blue Flag beach and are the site where the West Runton mammoth – the largest and oldest mammoth skeleton ever found – was discovered.

If you’re into hiking, why not walk along the cliff top until you reach Beeston Bump and take in some stunning views of West Runton and Sheringham. If you fancy a longer walk, you can follow the Norfolk Coast Path to Hunstanton.

Getting to West Runton Beach by train 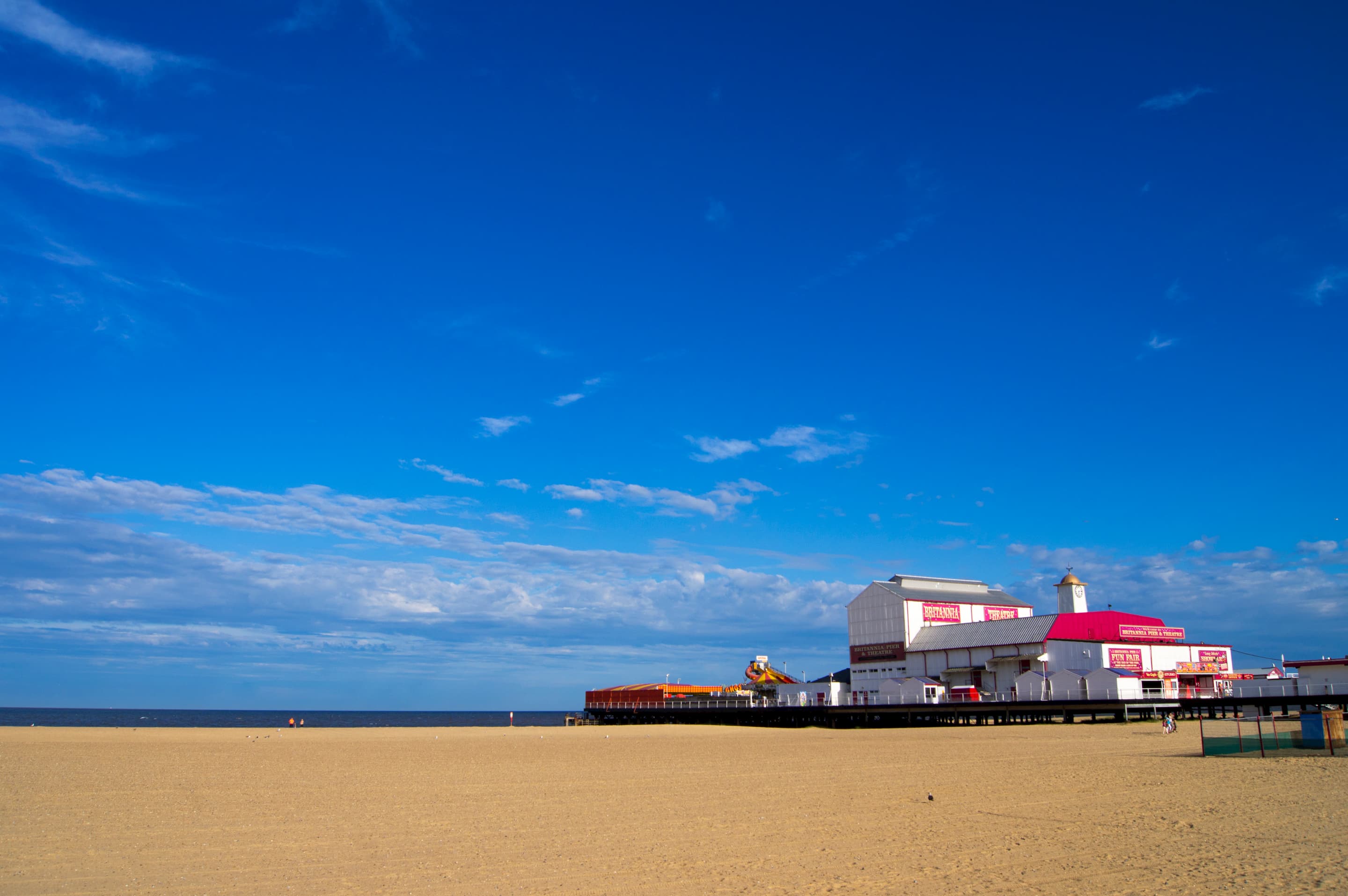 Visit the Britannia Pier, home to one of the last end-of-the-pier theatres in England, head east to discover the network of waterways that make up the Norfolk Broads or see if you can spot the many species of birds that migrate here.

Getting to Great Yarmouth Beach by train

Connecting services are also available from the Midlands, the North of England and Scotland via Peterborough, Cambridge, and Ely. Learn more about trains to Great Yarmouth.

Once you get off at Great Yarmouth station, you can have a nice 20-minute walk to the beach. 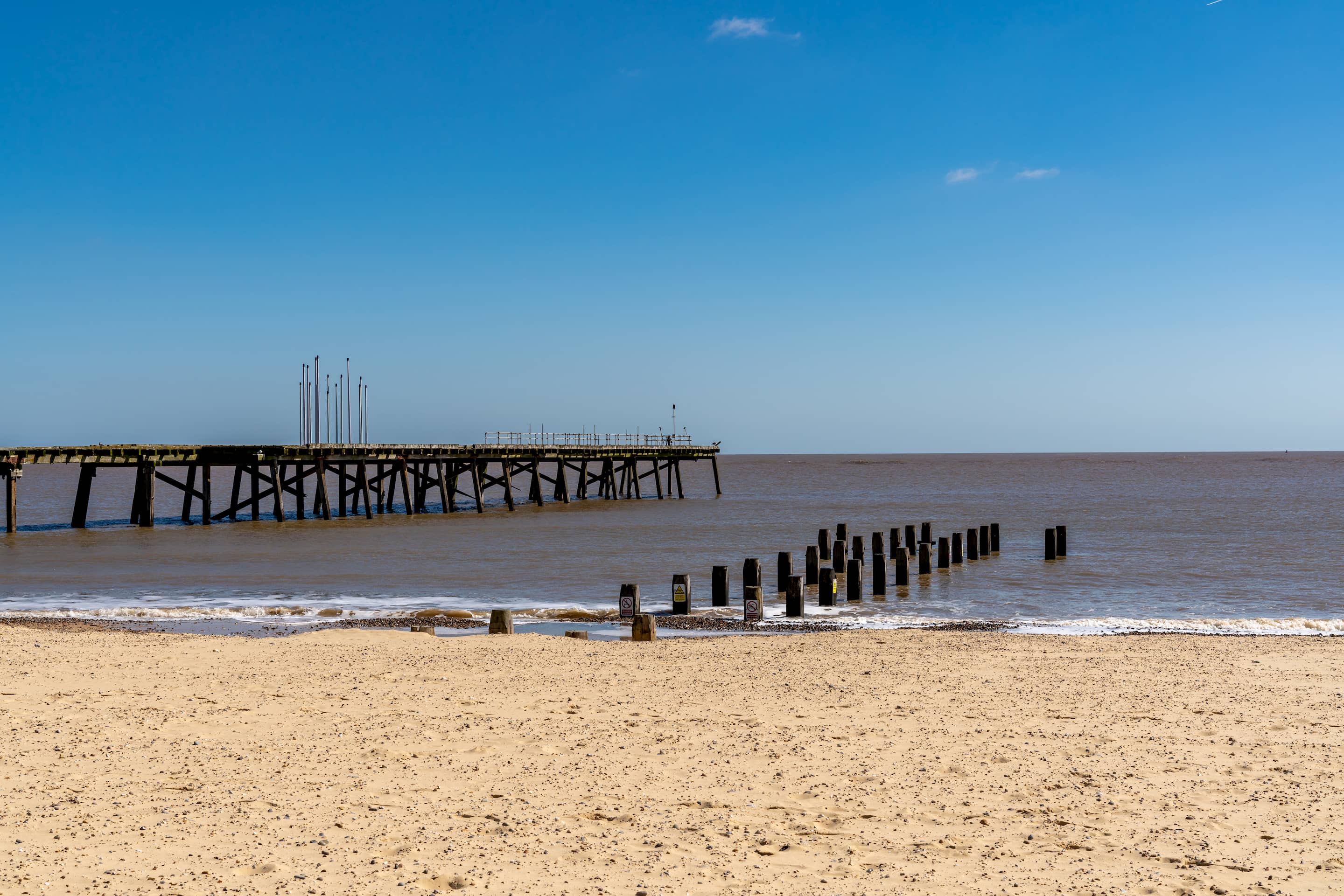 Last but not least, don’t miss your chance to go to Lowestoft South Beach when visiting Norfolk, you won’t regret it!

A favourite amongst families, this Blue Flag beach comes with wide golden sands, beach huts and a pier and is perfect for swimming and paddling, building sandcastles and enjoying a walk along the promenade.

Book a horse ride along the beach, enjoy a stroll through the Victorian seafront gardens or be entertained at the Royal Plain Fountains – there are plenty of things to do at Lowestoft South Beach!

Getting to Lowestoft South Beach by train

Once you arrive at Lowestoft station, it's just a short walk through the town over the bridge to the seafront and pier.

Looking for more UK beaches to reach by train? Why not check out our guides to the best beaches near London by train and the best UK beaches you can reach by train. Or, if you’ve already decided where to go next this summer, book your train tickets online with us.