Pride events in the UK

Heading to a Pride celebration in the UK this summer? There are over 100 events taking place across the country, so we’ve highlighted some of the major Pride events and the best ways to travel there. Get inspired! 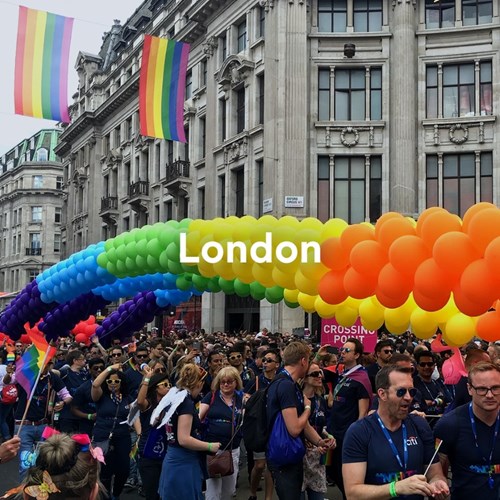 Join hundreds of thousands of partygoers at Pride in London this year. The parade travels from Portland Place to Trafalgar square and even shuts down Soho and Oxford Street for the day.

If you’re travelling in by train, Charing Cross station is the closest mainline train station to the event, but Blackfriars station or Victoria station make good alternatives as they’re just a 20-minute walk away and might be slightly less crowded.

This iconic celebration is one of the most popular places to celebrate Pride in the UK – over 300,000 people will be partying on the streets of Brighton – making it an event not to be missed.

Brighton’s train station is ideally located in the centre of the city, making travel into the city by train an easy option for those who live elsewhere – especially Londoners. There will also be plenty of National Express coaches running to and from Brighton over the weekend, where you’ll be guaranteed a seat with your ticket – just remember that the coach station in Brighton is located further down the road from the train station when you’re arranging meetups with friends. 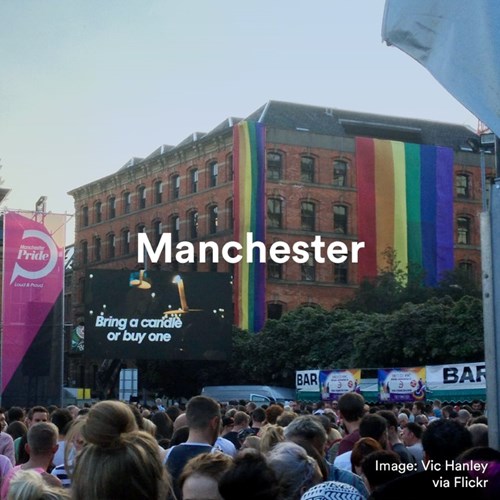 What better time to celebrate Pride than a bank holiday weekend! The highly anticipated parade takes place on the Saturday of the August bank holiday and thousands will be heading to Manchester’s famous Canal Street to join in the party.

If you’re heading into the city by train, Manchester Piccadilly station offers direct rail services from London, Newcastle, Stoke-on-Trent and Reading, to name a few. It’s then just a 10-minute walk from the station to the celebrations!

Some other major UK Pride events

If you’re thinking of heading a little further afield to celebrate Pride this year, or you’re already in the country, there are hundreds of events taking place all over Europe that are well worth the trip. Take a look at some of the biggest European Pride parties happening this summer.

More than half a million people will be celebrating Pride on the historic streets of Paris this year, with the parade taking place from the Louvre along to the Place de la République.

There are several train stations in Paris, making it well connected to other major cities in France, as well as cross-border connections. Gare du Nord is the main station for Eurostar trains if you’re travelling from the UK. 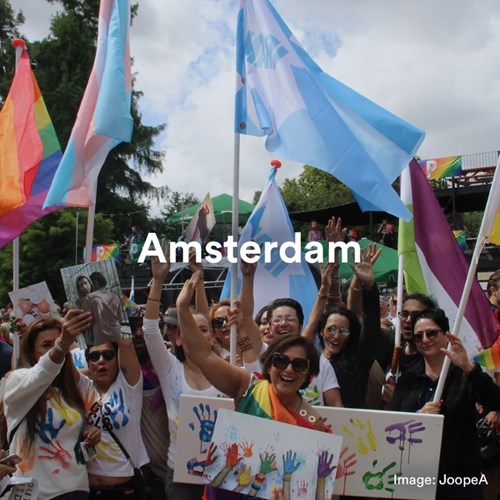 Pride brings thousands of people to Amsterdam for a weekend of celebrations each year. The famous Canal Parade starts from the Scheepvaart Museum, with boats making their way around the city via the canals towards Westerdok. Once the parade has finished, you’ll find plenty of street parties to carry on the celebrations into the night.

If you’re travelling to Amsterdam via train, it’s easy to walk from Amsterdam-Centraal station to any part of the parade. For those travelling from the UK, Eurostar trains run direct services from London St Pancras. 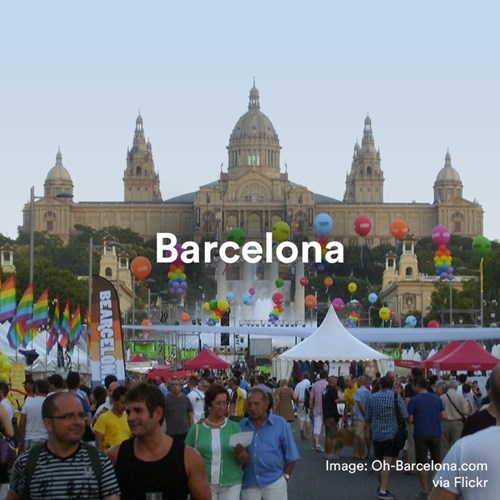 Join thousands of other partygoers and celebrate Pride in the beautiful city of Barcelona. The main parade takes place on Saturday evening followed by a huge concert along Av. Maria Cristina until the early hours.

Barcelona is well connected by both rail and road, making travelling to the city by train or bus easy. Barcelona Sants train station is just a 20-minute walk from the heart of the party and is served by regular high-speed Renfe AVE services.

Some other major European Pride events

Trainline does not have any affiliation with Pride events in the UK and Europe, for more information on these Pride events please visit their websites.