The statue of David is one of Michelangelo’s most famous works, recognised worldwide as a Renaissance masterpiece. But David also has great historical and political significance for the city of Florence.

Now housed in the Accademia Gallery in the San Marco neighbourhood, the statue of David is a must-see attraction when visiting the Tuscan capital.

Getting to Florence by train

If you’re planning a trip to Florence to visit the statue of David at the Accademia Gallery, the best way to get there is by train. Santa Maria Novella is Florence’s central station, where you’ll find regular services arriving and departing from across Italy.

Why not enjoy a day out in Florence if you’re staying elsewhere in Tuscany? It’s easy to get there by train from neighbouring cities like Arezzo, Lucca, Siena and Pisa, with average journey times of under 2 hours. Travelling from further afield? Get to Florence in 1 hour and 30 minutes from Rome, or 2 hours 15 minutes from Venice.

Once you arrive at Firenze Santa Maria Novella station, you’re a 15-minute walk away from the Accademia Gallery, where you can see the statue of David. The gallery is located in the San Marco area of Florence, close to many of Florence’s other historical attractions, including Piazza del Duomo, the Cathedral of Santa Maria del Fiore and Giotto’s Bell Tower.

You’ll also find plenty of shops, restaurants and bars near the Accademia Gallery. Find recommendations for the best places to eat, drink and shop when it’s time to take a break from sightseeing in our dedicated guide.

History and facts about the statue of David

The statue of David is a marble sculpture made by the Italian Renaissance artist Michelangelo between 1501 and 1504.

But Piazza della Signoria wasn’t the intended location for this statue when it was commissioned in the mid-1400s. David was supposed to be one of twelve sculptures adorning the roof of the Cathedral of Santa Maria del Fiore. Weighing six tonnes, it was nearly impossible to lift into position.

How old is the statue of David?

Although it’s dated from 1501 to 1504, work began on the statue of David much earlier – but not by Michelangelo. In 1464, Agostino di Duccio started sculpting the enormous piece of marble, then in 1466, Antonio Rossellino took over. Very little progress had been made at this point, with only the feet and legs starting to take shape.

It’s unclear why work on the statue was abandoned or why it took so long to appoint someone new to complete the sculpture. But due to the enormous size of the marble block and the natural flaws in the material, it was tricky to carve. This might explain why neither of the artists saw the project through.

In 1500, the operai committee overseeing the cathedral’s workshop appointed Michelangelo to complete the piece. Between 1501 and 1504, Michelangelo created the statue of David as we know it today, making the iconic sculpture over 500 years old.

How tall is the statue of David?

The statue of David is 17-foot tall (5.17 metres). Due to its towering height, Giorgio Vasari – one of Michelangelo’s contemporaries – said this statue was more impressive than the classical sculptures from ancient Greece and Rome.

Take a closer look at David, and you’ll notice his right hand and head are out of proportion. Michelangelo enlarged these features thinking the statue would be seen from below, had it sat in its intended location on the cathedral’s roof.

For the Republic of Florence, the biblical figure of David symbolised power and strength when their independence was under threat from the Medici family and rival states across Italy.

The biblical hero was revered by those in Florence long before Michelangelo’s David was created. He even featured in another sculpture housed in Piazza della Signoria: Donatello’s bronze David, made around 1440 for the Medici family.

However, in 1504 Michelangelo’s David replaced Donatello’s, demonstrating the Republic’s superiority over the Medici, who had dominated Florence’s political landscape for centuries until their exile in 1494. This is why Michelangelo’s David gazes to his left, looking towards Rome, where the Medici had fled to.

So, it seems the operai who commissioned the statue of David had political motives for this work of art long before it was created.

The biblical figure of David was a popular subject for many Renaissance artists, appearing in several sculptures throughout the period. After his battle with Goliath, many showed him wearing armour with the giant’s severed head at his feet. But Michelangelo’s work shows David before he faced the giant, following the Bible passage where David refuses armour from King Saul, believing God would protect him.

The fact that Michelangelo’s David is nude sets him further apart from his contemporaries. He references the classical sculptures of ancient Greece and Rome where gods, goddesses and heroes were naked, drawing attention to their youth and beauty. David’s contrapposto pose is also borrowed from antiquity, making him look more realistic, as though in motion.

The realism, heroism, youth and beauty embodied by Michelangelo’s David makes him an iconic symbol of the Renaissance and a must-see attraction when in Florence.

Restaurants, bars and shops around the Accademia Gallery

The Accademia Gallery is located in the San Marco neighbourhood of Florence, where you’ll find plenty to do after visiting the statue of David. We’ve compiled a list of the best places to eat, drink and shop in the area, so you can plan your day from start to finish.

Why not take a break from sightseeing and enjoy a coffee or aperitivo at one of the many cafés and bars in San Marco? If you want to grab lunch on the go, sit down at a family-run trattoria or enjoy a relaxed dinner, you’ll be spoiled for choice in this area.

Best restaurants near the Accademia Gallery

Heading to the gallery in the morning? Stop for coffee, breakfast or lunch at a café en-route:

Visiting the statue of David in the afternoon? Enjoy lunch or dinner at one of these fantastic restaurants:

Best bars near the Accademia Gallery

Mull over Michelangelo’s masterpiece whilst enjoying an aperitivo at one of these bars: 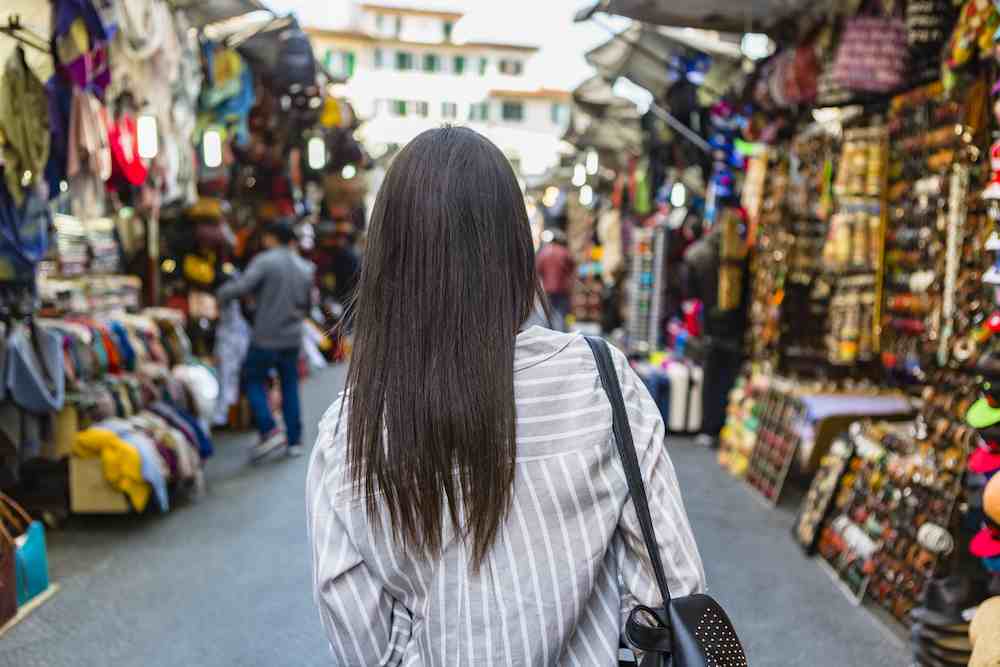 Best shops near the Accademia Gallery

San Marco is home to many vintage boutiques and independent shops selling clothing, leather goods, homewares and art. Some of the best shops to check out whilst you’re in this area are:

You’ll also find two of Florence’s largest and most popular markets nearby: Mercato Centrale and Mercato San Lorenzo. Here you can shop for food, wine, souvenirs, ceramics, leather goods and more. Both markets are located on Via del Ariento, an 8-minute walk from the Accademia Gallery.

Booking your tickets in advance is advised, as waiting times can be long, especially in peak season. Those with pre-booked tickets can access the gallery via a separate entrance, so you won’t need to queue.

Discover more things to do in Florence in our dedicated guide. Before you travel, find out the best shops, restaurants and nightlife across the city and plan your trip from start to finish.