Start your trip to the Tuscan capital in one of its oldest and best-known public squares, Piazza della Signoria. Here you can explore the city’s rich history and culture in one location, thanks to the wealth of palaces, sculptures and plaques dotted around the square.

Find out more about Piazza della Signoria in our guide, including:

It's easy to plan a day out in Florence, with regular services arriving into Santa Maria Novella from across Tuscany. Bologna is less than 40 minutes away by train, whilst the fastest services from Pisa and Arezzo take around 1 hour.

You can also travel to Florence by train from many destinations across Italy, including Rome, Milan and Venice. So why not extend your trip for a few days and make the short train journey to Florence, where more history, culture, food and beautiful scenery awaits you?

What to see at Piazza della Signoria

Don’t miss out on these artworks, landmarks and attractions if you’re planning to visit Piazza della Signora during your trip. 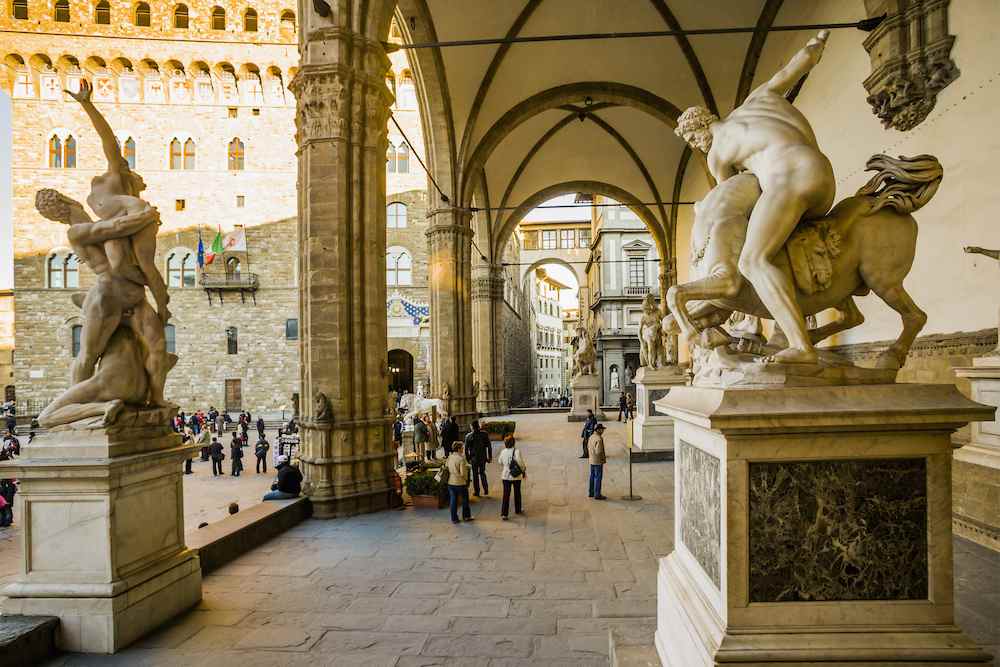 Perhaps the most famous statue in Piazza della Signoria is the replica of Michelangelo’s David, outside the Palazzo Vecchio. The original statue of David is housed in the Accademia Gallery.

Another well-known Renaissance sculpture sits outside the Palazzo Vecchio: Donatello’s bronze sculpture, Judith and Holofernes. He also made the Marzocco lion in front of the palace. Like Michelangelo’s David, both statues have been replaced with copies.

The outdoor sculpture court known as the Loggia dei Lanzi is located on the left of the Palazzo Vecchio, behind the Uffizi Gallery. Here you can see antique sculptures, including the Medici lions, alongside Renaissance works by Giambologna and Cellini.

This medieval palace was home to the government, or signoria, during the Florentine Republic. Part of the building is still the town hall, but Palazzo Vecchio is best-known for its museum, detailing Florence’s civic and political history.

Built by Arnolfo di Cambio in 1299, the imposing exterior of Palazzo Vecchio dominates the Piazza della Signoria. Inside, the palace contains some incredible examples of medieval and Renaissance art and architecture, so be sure to pay a visit whilst you’re exploring Piazza della Signoria.

Check out our guide to visiting Palazzo Vecchio for more information on this must-see attraction. 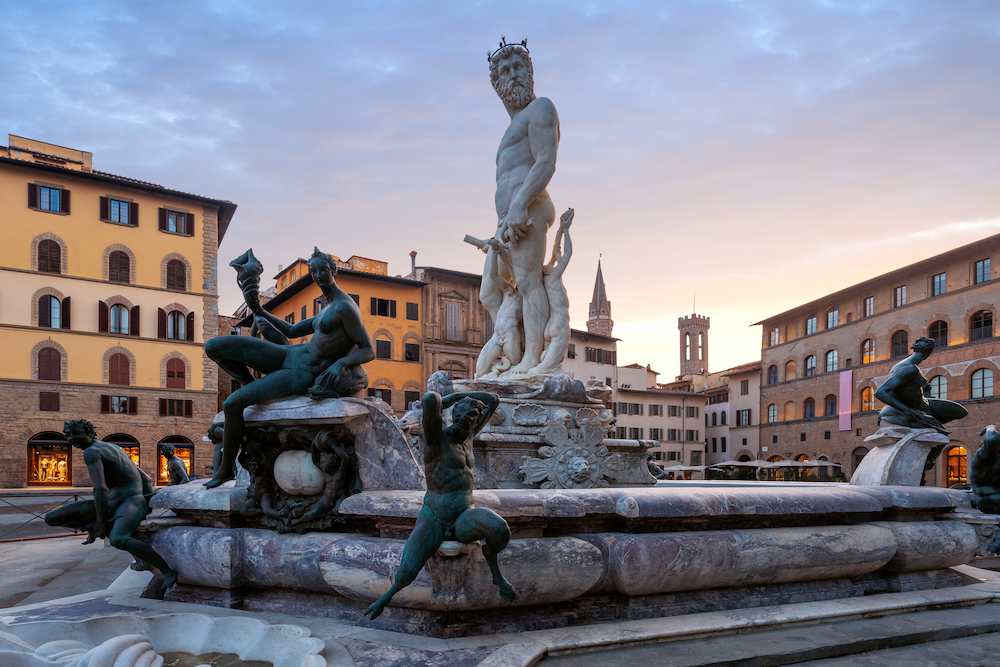 The Neptune Fountain is one of the most striking architectural features of Piazza della Signoria, thanks to its impressive size and prominent position in the square, right outside Palazzo Vecchio.

Built by Bartolomeo Ammannati between 1560 and 1574, this impressive fountain was sculpted from marble, bronze and mischio, a coloured marble-like material. Cosimo I de’Medici commissioned the fountain in 1559 to celebrate the marriage of his son, Francesco I de’Medici, to Joanna of Austria.

It depicts figures from Greek mythology such as Neptune, Tritons, Satyrs and Fauns. Neptune resembles Cosimo I, alluding to the Duke’s power in the Mediterranean.

As well as the imposing Palazzo Vecchio, Piazza della Signoria is home to several smaller medieval and Renaissance palaces.

At the corner of Piazza della Signoria, where the square meets Via Calimaruzza, is Palazzo dell’Arte dei Mercatanti (Palace of the Art of the Merchants). The 13th- century building was once home to the guilds of arts and crafts in Florence, known as the Calimala. You can still spot their coat of arms, despite numerous changes to the original building.

You’ll also find Palazzo Uguccioni in Piazza della Signoria, constructed in 1550 for Giovanni Uguccioni. The designer of this stunning Renaissance palace is widely debated, with suggestions including Raphael, Michelangelo, Andrea Palladio, Bartolomeo Ammannati and Raffaello da Montelupo. There is a bust of Francesco I de’Medici above the entrance, possibly made by Giambologna.

Discover the history of one of Florence’s most famous fashion houses at the Gucci Garden in Piazza della Signoria. Opened in 2011, the museum displays iconic pieces designed by the brand alongside collaborations with artists and celebrities. There is also a Michelin-starred restaurant, Gucci Osteria, where you can enjoy fine dining in a unique setting.

Gucci Garden is housed in the Tribuna della Mercanzia (Court of Merchandise), finished in 1359. The court was established to settle disputes between merchants and members of the Florentine guilds. Artworks by Sandro Botticelli, Piero Pollaio and Taddeo Gaddi once decorated the entrance, now on display in the Uffizi.

When the Piazza della Signoria was re-paved in the 1980s, archaeologists found a former Neolithic site. What began as a straightforward restoration led to some fascinating discoveries, including evidence that this was once a central square in Roman Florentia, with baths and a theatre. Remains of an ancient church from the 5th century were also found.

Piazza della Signoria began to take on its current form in 1268 when the religious wars across northern and central Italy led the victorious Guelphs to destroy Ghibellines’ houses. Palazzo Vecchio was built shortly after, in 1299, and the square was fully paved in 1385.

In 1497 Girolamo Savonarola and his followers held the Bonfire of the Vanities in Piazza della Signoria. The Dominican friar believed in Christian reform and the destruction of secular art and culture, burning books, poetry, gaming tables and extravagant clothing. He was excommunicated by Pope Alexander VI and later hanged for heresy in Piazza della Signoria in 1498.

If you’re wandering around Florence’s historic centre, you’re bound to stumble upon Piazza della Signoria. Located near many of the city’s most notable attractions, the sprawling square is a 1-minute walk from the Uffizi Gallery and 3 minutes from Ponte Vecchio. Piazza del Duomo and the famous Cathedral of Santa Maria del Fiore are 6 minutes away on foot.

Stop for lunch or dinner at one of these restaurants near Piazza della Signoria, where you can enjoy a sandwich on fresh schiacciata (Tuscan focaccia bread), tuck into a delicious Italian pizza or sample traditional Tuscan cuisine:

Our guide to the best restaurants in Florence offers a culinary tour of the city by area, making it easy to plan your trip. Whether you’d prefer a romantic dinner for two or you’re looking for family-friendly options, we’ve got you covered.

What better way to finish a busy day of sightseeing than relaxing with a drink? These are the best places to head for an aperitivo near Piazza della Signoria:

You’ll be spoiled for choice when it comes to shopping near Piazza della Signoria. Try these streets for popular high-street shops, departments stores and designer boutiques, all just a stone’s throw away from the square:

Planning a shopping spree in Florence? Our guide to shopping in Florence has you covered, featuring the best places to buy designer goods, where to find unique pieces and which markets are best for a bargain.

Travelling to Florence by train?

Want to find out more about travelling to Florence by train? Check out our guide to trains to Florence.

Once you’ve ticked Piazza della Signoria off your itinerary, why not check out some more of Florence’s attractions or discover more things to do in the city?