Piazzale Michelangelo is Florence’s most spectacular viewpoint, offering a panoramic vista of the city from across the River Arno. Whether you’re visiting Florence for a long weekend or an evening, it’s worth walking to Piazzale Michelangelo from the city centre for these breathtaking views!

Taking the train to Florence

Travelling to Florence by train is the quickest way to reach the Tuscan capital, wherever you’re staying in Italy. With regular services arriving into Santa Maria Novella from across the region, you can easily visit Florence from Arezzo, Bologna, Siena, Pisa and Lucca.

Rome and Milan are under 2 hours away by train, so why not extend your trip and visit Florence whilst you’re in Italy?

Alternatively, you can walk to Piazzale Michelangelo from Santa Maria Novella in around 35 minutes.

What to see at Piazzale Michelangelo

The best thing to see at Piazzale Michelangelo is undoubtedly the incredible view of Florence. From this vantage point, you can look out over the city against the backdrop of rolling hills and the surrounding Tuscan countryside.

You’ll be able to make out most of Florence’s landmarks and attractions from Piazzale Michelangelo, including Palazzo Vecchio, Giotto’s Bell Tower, the Cathedral of Santa Maria del Fiore, the Uffizi Gallery, Ponte Vecchio, the Basilica of Santa Croce and the Great Synagogue of Florence.

But the panorama of Florence is not all there is to see at Piazzale Michelangelo. From immaculate gardens to a medieval abbey run by Benedictine monks, you could spend a whole afternoon exploring this area. 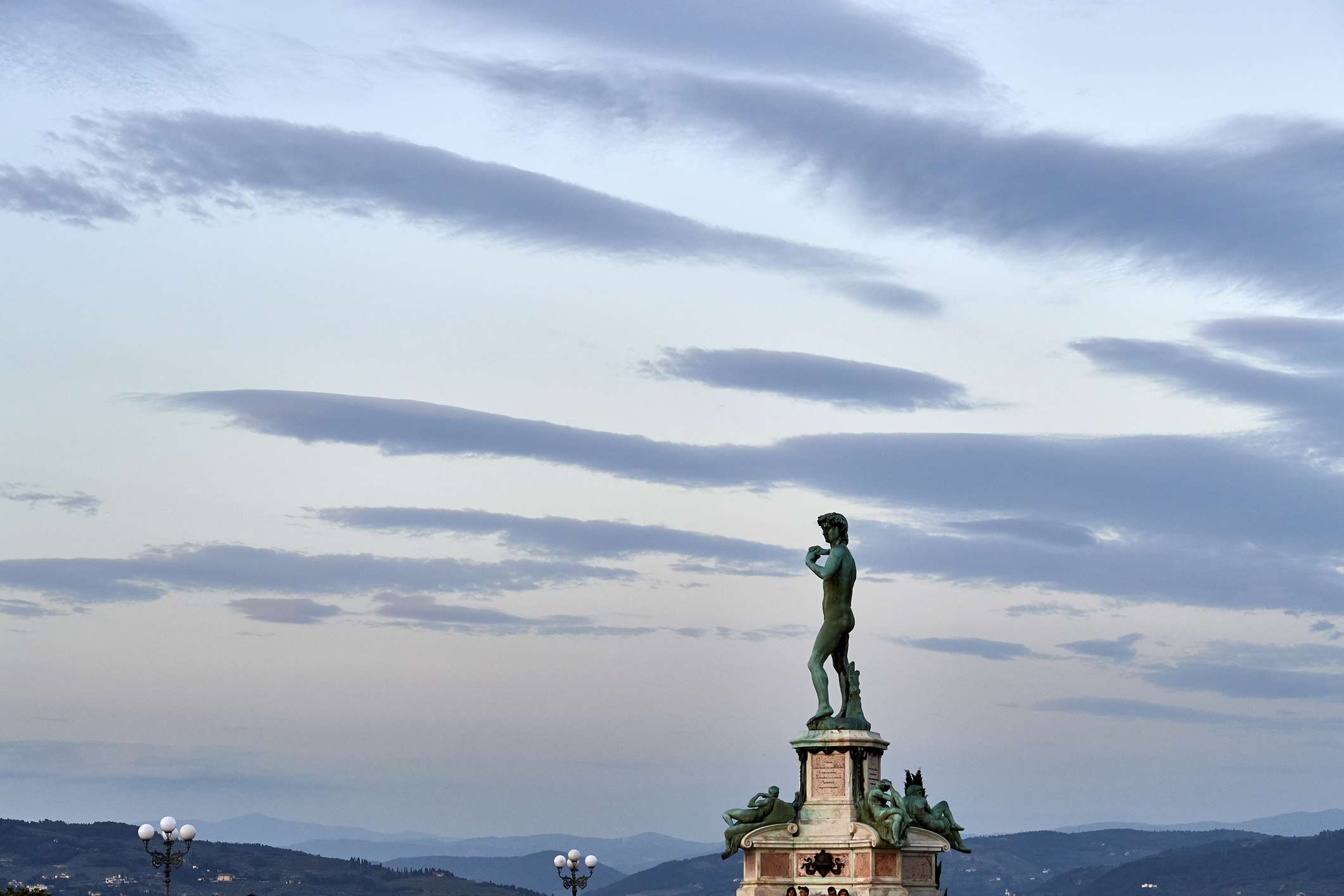 As its name suggests, Piazzale Michelangelo was dedicated to the artist Michelangelo. The square was initially intended to house a museum of his works, which unfortunately was never realised. But you’ll notice bronze copies of many of his most famous works around Piazzale Michelangelo, including the statue of David.

Take a detour through these stunning public gardens on the side of the mountain (Monte alle Croci), below Piazzale Michelangelo. The terraced Rose Garden was built in 1865 by Giuseppe Poggi during developments to the Oltrarno neighbourhood. From here, you’ll get the same incredible view of Florence from a different perspective to that of Piazzale Michelangelo.

In 2011, the widow of Belgian artist Jean-Michel Folon gifted 12 sculptures to the city, now displayed in the Rose Garden. The gardens are also home to a Japanese Shorai oasis, donated by Florence’s twin city, Kyoto. 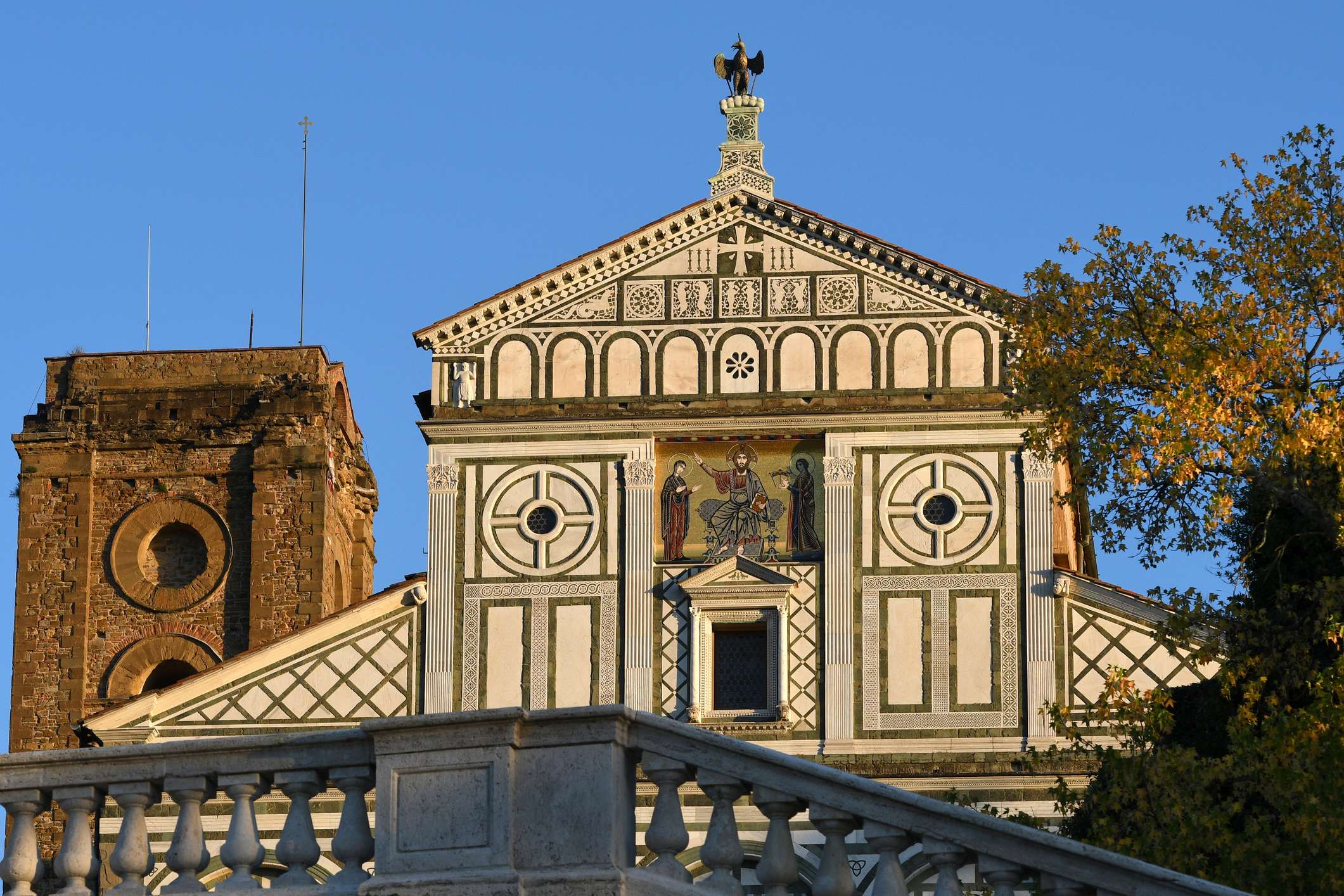 This Romanesque church sits at one of the highest points in Florence, overlooking the River Arno and the city. Built in 1013 on a shrine to St. Minas, the church was endowed by Roman Emperor Henry II. The adjoining monastery is still active today, run by Benedictine monks from the Olivetan order.

The interior of San Miniato al Monte is stunning, with mosaic decorations dating back to 1297, late medieval frescoes by Taddeo Gaddi and a crucifix made by the Renaissance artist Michelozzo. 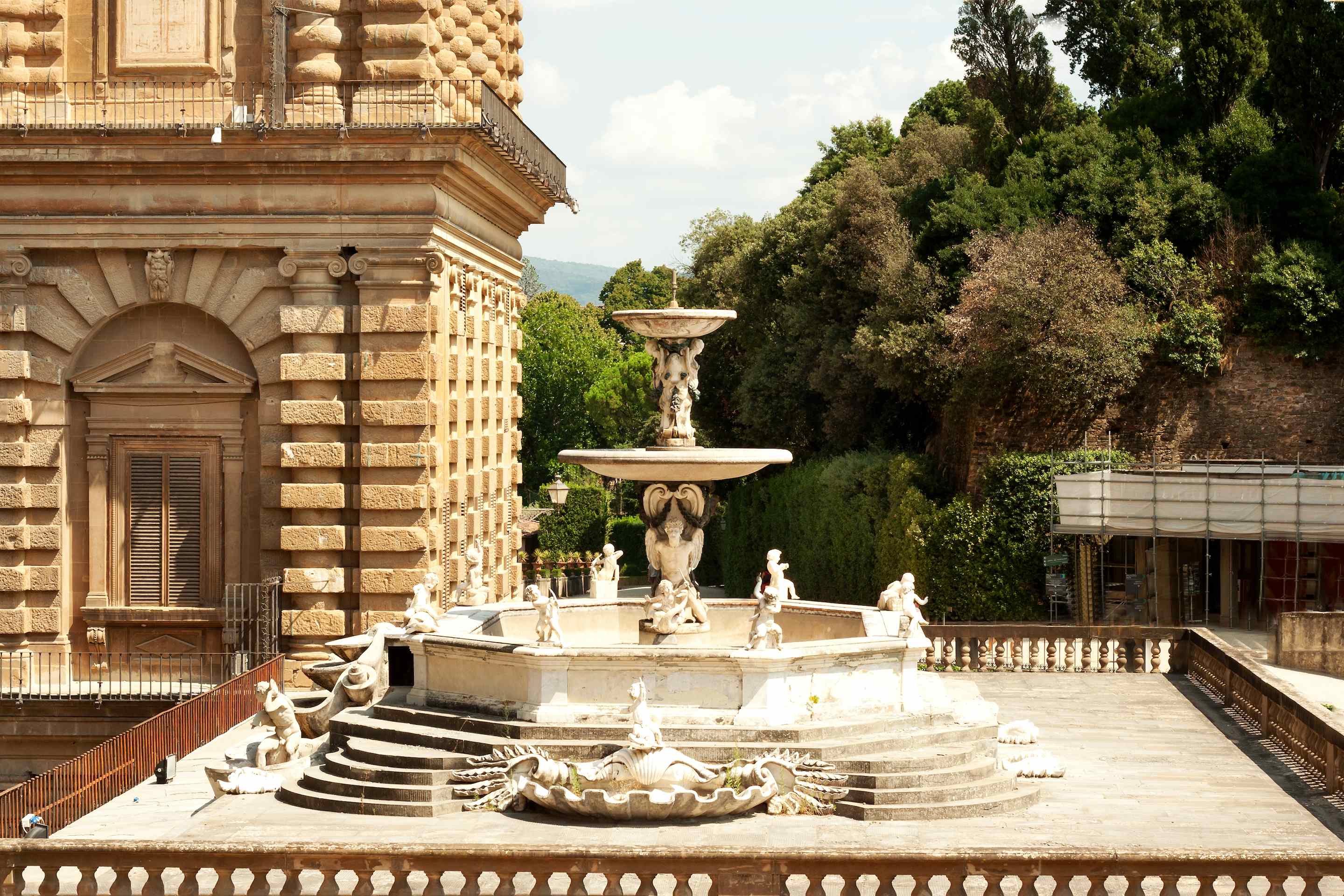 If you’re heading over to Oltrarno to visit Piazzale Michelangelo, why not pay a visit to Pitti Palace and its stunning gardens? This grand palace is best known as one of the Medici residences and now houses four museums.

Boboli Gardens are directly behind the Pitti Palace, once the private gardens of the Medici. Often described as an open-air museum, this vast and decorative green space houses many sculptures from antiquity to the 20th century. The gardens boast impressive architectural features, like the Buontalenti Grotto and an amphitheatre.

This 17th-century villa is named after the collector Stefano Bardini, who bought it in 1913 and restored the gardens. But the Bardini Gardens are older than the villa itself, dating to the 15th century.

Villa Bardini was abandoned for many years until being restored to its former glory in 2006. It now houses the Pietro Annigoni Museum alongside other exhibition and event spaces. Many original Renaissance features remain in the gardens, with later additions such as the 19th-century Anglo-Chinese garden and an agricultural park.

Piazzale Michelangelo was designed by the architect Giuseppe Poggi in 1869, dedicated to the famous Renaissance artist. He built a neoclassical-style loggia on the square to house Michelangelo’s artworks.

Instead, the loggia became a café and restaurant, still open today. Many famous Italian artists, writers and thinkers of the late 19th century frequented the café, so it was well-known in Florence as a centre of cultural and artistic debate.

Although the museum was never built, there are plenty of traces of Michelangelo here. Most notably, the bronze copies of his sculptures adorning the square, including the statue of David and the four allegories of the Medici Chapel of San Lorenzo.

The large, public piazza (square) was built during the redevelopment of the Oltrarno area. During this time, Florence was the capital of Italy, so the entire city underwent an urban renewal known as the risanimento (renovation).

More open space was created across Florence, including Piazzale Michelangelo. The city’s walls were removed to create a wide boulevard along the right bank of the River Arno, and lungarni (walkways) were built on either side of the river.

Piazzale Michelangelo is located south of the city centre, on the opposite side of the River Arno, known as the Oltrarno district. It is situated on the top of a hill, San Miniato, the highest point in Florence.

You can get to Piazzale Michelangelo on foot in around 25 minutes from Florence’s historic centre. Follow the tree-lined street called Viale Michelangelo up to the top of the hill, which will bring you directly to the square. Alternatively, you can climb the stairs or ramps from Piazza Giuseppe Poggi.

If you don’t fancy climbing the hill, take the number 23 bus from the Santissima Annunziata stop in San Marco for 7 minutes and get off at Zecca Vecchia Piave. From here, it's a 6-minute walk to Piazzale Michelangelo. 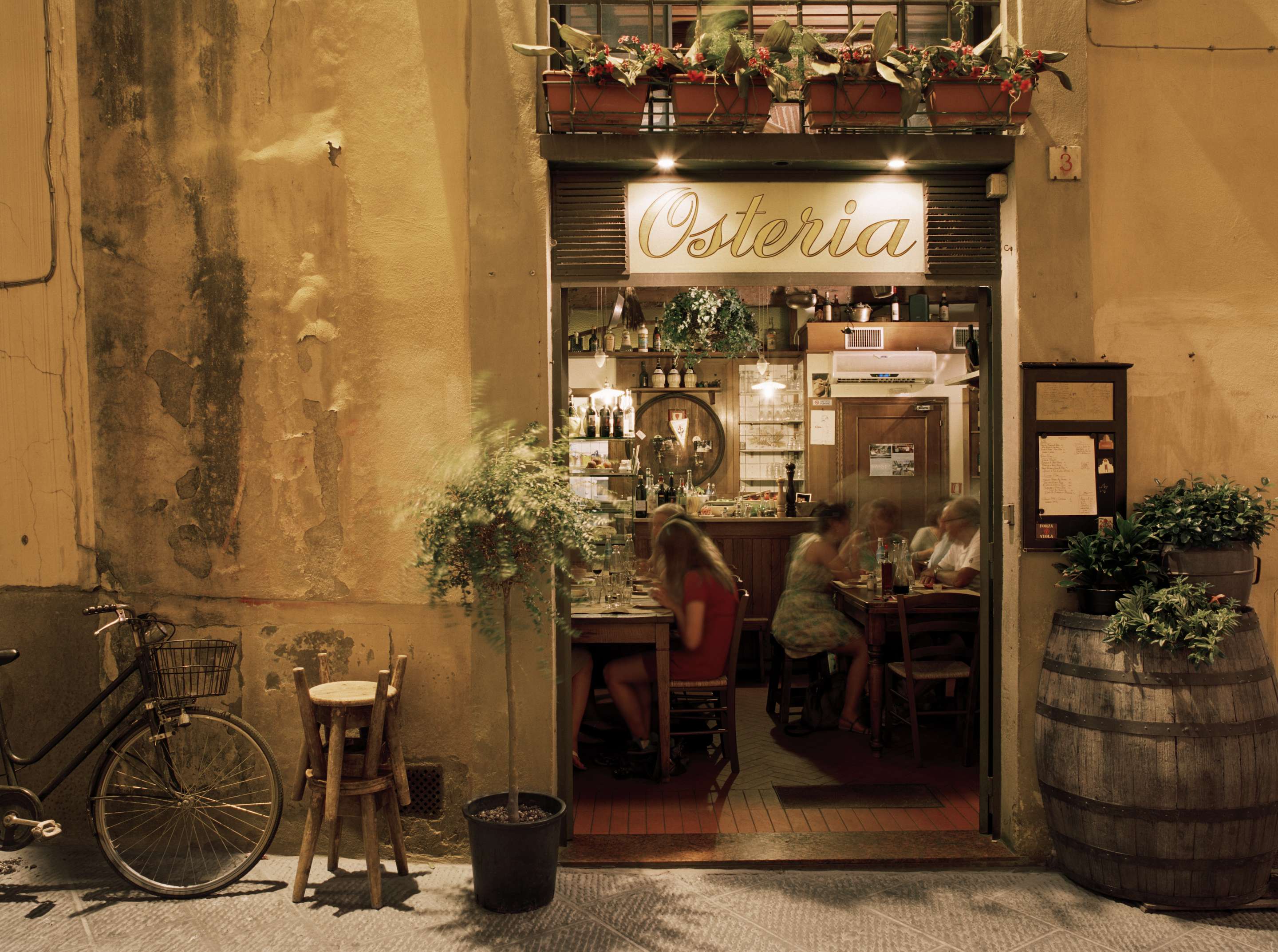 Whilst you’re in Oltrarno, why not explore the many restaurants, bars and shops this area has to offer? From osterias serving local dishes to cocktail bars along the River Arno and artisan workshops selling unique pieces, there’s plenty to discover after you’ve visited Piazzale Michelangelo.

Climbing up the hill to this iconic viewpoint is no mean feat, so you might want to stop on your way down to refuel. These are the best restaurants near Piazzale Michelangelo:

Relax over a coffee or aperitivo at one of these bars and contemplate the beautiful views you’ve just seen at Piazzale Michelangelo:

Browse boutiques selling clothes, jewellery, art, perfume and more to find a special souvenir from your trip to Florence. Or pick up some locally made cheese and wine at one of these specialist stores near Piazzale Michelangelo:

Wondering what else to see during your trip to the Tuscan capital? Or are you searching for the best places to eat, drink and shop in the city? Check out our dedicated guide on things to do in Florence and plan your trip from start to finish!