Getting to the Duomo

As Italians say – tutte le strade portano a Roma (all roads lead to Rome). The same is true for Milanese. No matter how far you venture, you’ll always come back to the Duomo. But how to get there if you’re travelling by public transport?

Found in Milan’s zone one, right at the city’s heart, the Duomo can be reached easily from everywhere. The closest train station is Milano Cadorna, just a 20-minute walk. From Cadorna, you can also take the M1 to Duomo, which will drop you right in the main square.

If you’re arriving in Milano Centrale, you can hop on the metro to the Duomo, which runs every 5 minutes. Alternatively, you can take tram line 1 to the north of the station, going all the way to Piazza del Duomo. From Milano Garibaldi, take the M2 to the Cadorna stop. From there, you can either choose to walk or take the M1 to the Duomo.

Think you’ll be using public transport often during your stay? We advise you to get either the 48-hour or the 24-hour travel ticket, which allows you to hop on any metro, bus or tram as many times as you’d like within the timeframe.

What to see at Duomo di Milano

You simply can’t visit Milan without making a stop at the Duomo. The Cathedral of the Nativity of Saint Mary is the third-biggest in the world, after Rome’s St Peter’s Basilica and Seville’s Cathedral, with space for up to 40,000 people. Its construction took more than six centuries, and it’s no wonder. Let’s take a look at just some of the things you can see at the Duomo. 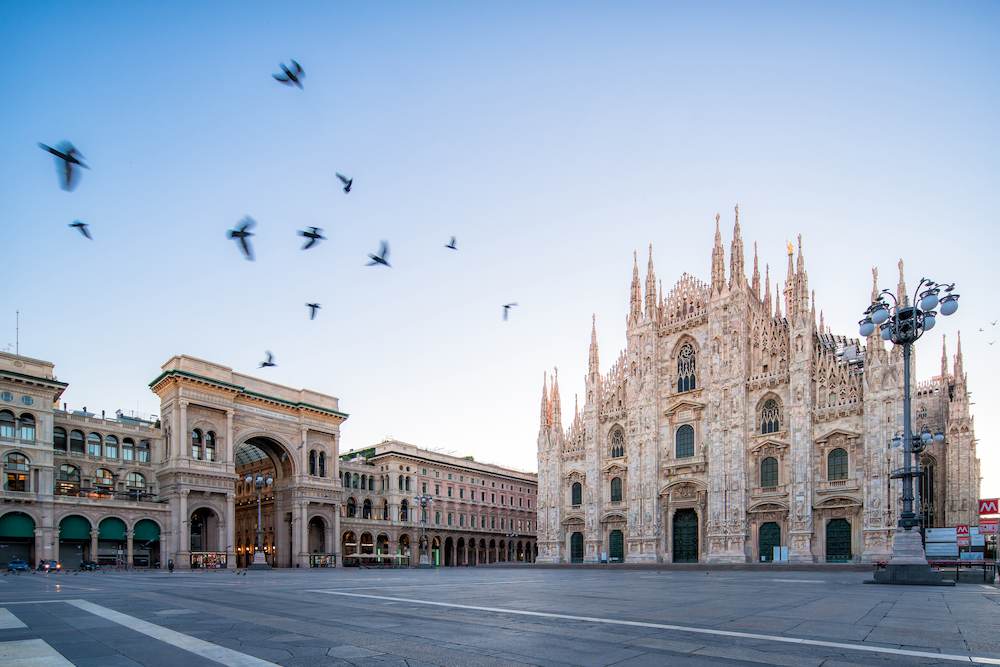 The Duomo is as architecturally astonishing on the outside as it is inside. Its pearly white façade is adorned with 135 gargoyles and 3,400 statues. It proudly displays a mélange of different artistic styles, including Romantic, Gothic and Gothic Revival.

Unlike the bright patterned exterior, the interior is dim, offering a sharp contrast to the overall ambience. The first thing you’ll notice is the central door, carved by Lodovico Pogliaghi in 1906. It’s themed around stories from the life of Mary and decorated with Gothic floral reliefs.

Its vast spaces are dominated by 15th to 16th-century stained-glass windows – the largest in the world. Its 52 gigantic pillars give depth to the naves, leading to the three altars designed by architect Pellegrino Pellegrini.

While you’re taking in the grandiosity of the Duomo, don’t forget to look up to the dome. The small red light bulb above the apse is not a random detail. The nail where Jesus Christ was crucified is stored there. Other highlights in the Duomo are the 16th-century tomb of Gian Giacomo Medici and the jewelled gold reliquary of San Carlo Borromeo.

Inaugurated in 1953, the Duomo Museum is a space to learn about the history of Milan’s majestic cathedral, from the early stages of its construction to the final result. You can also see original elements taken from the Monument, including sculptures, tapestries, stained glass and terracotta artefacts.

The Duomo’s archive and the library are home to annals tracing the cathedral's history between 1387 and 1875. There’s also a photograph archive, a collection of early blueprints and the Music Chapel's complete archive.

The library tells the history of the Duomo and dives deep into Milan’s past and its transformation into a cosmopolitan metropolis.

The Cappella Musicale del Duomo (The Duomo Music Chapel) was established in 1402. In the same year, the Veneranda Fabbrica appointed the Chapel’s first master – Matteo da Perugia. He became the first maestro di cappella and paved the way for the next ones. By the time he left, the Chapel’s organisation included a master, organist, deputy master and choristers. 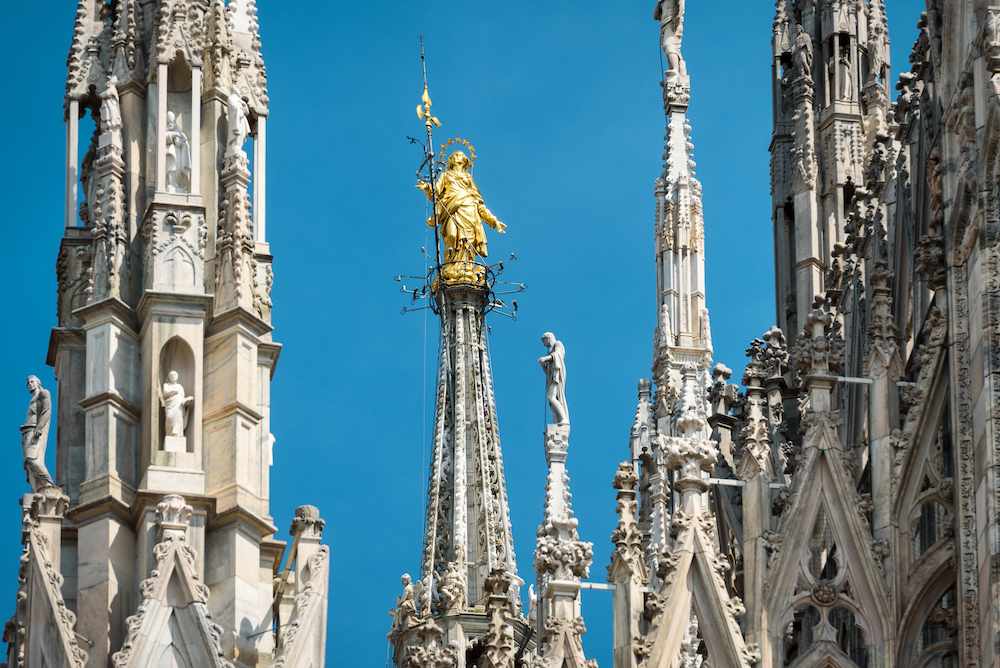 Crowning the magnificent Duomo is the gilded copper statue of the Madunina (Madonnina in Milanese dialect) – Milan’s emblem and protector. Standing proud at the tallest spire of the Cathedral, the Madonnina is the city’s quintessence, designed by sculptor Giuseppe Perego and completed in 1773.

The Madunina is not only a religious symbol but also a civic milestone. Luigi Torelli and Scipione Bagaggi raised the tricolore (the tricolour) to mark the end of the Austrian invasion in 1848.

For a long time, no building could be higher than the Madonnina. Although this is no longer true, many of the city’s skyscrapers have installed a statue replica on their highest point to continue the tradition.

The early design of the Duomo was received with scepticism; not enough technologies were available to dig the canals to carry the marble. Plus, the Gothic style was considered out of fashion.

However, Milan’s ruler of the time, Gian Galeazzo Visconti, liked the idea of such an ambitious project, as he wanted to modernise the area and celebrate the expansion of the Visconti family. He decided to build the Cathedral on the same site as the former Basilica of Sant’Ambrogio and the Basilica of Santa Tecla and began the work in 1386. Let’s dive deeper into the timeframe of Duomo’s construction and how the city has evolved throughout.

The project was regulated by the Fabbrica del Duomo, which had around 300 employees. Visconti’s decision to use Candoglia marble from Lake Maggiore instead of traditional Lombardy terracotta led the Fabbrica to look for architects, sculptors and engineers from all around Europe.

The Duomo became a crossroads of people exchanging different ideas and visions, ultimately becoming the most Gothic European Cathedral. At least 78 head architects took part in its construction, so it’s difficult to trace the authorship.

Works began from the apse and its impressive stained-glass windows and continued towards the transept and the first spans of the naves. The Cathedral was initially consecrated in 1418, although only one nave was completed. After the consecration, the Duomo remained incomplete for centuries due to a lack of money and political issues.

The 16th century and Borromeo

The façade design began at the end of the 16th century. The lantern tower and the laying of the Madonnina were completed between the 17th and 18th centuries. After Napoleon’s coronation in 1805, the project developed rapidly. Most of the spires were placed on the roof, stained glass and the façade were finished. In the second half of the 20th century, the Fabbrica undertook complex structural restoration, especially on the façade and spires.

The Duomo has never really stopped being under renovation despite the construction being officially over. In 2002, a five-year project to clean the building began. In 2016, the challenge of restoring the dome and the tower also started.

Restaurants, bars and shops near the Duomo

Whether you want to grab a quick bite, enjoy a well-deserved aperitivo or treat yourself to some of Milan’s famous shopping, the city has it all. Thanks to its central location, the area near the Duomo is packed with fine restaurants, classic Italian trattorie, cocktail bars and high-end ateliers.

Restaurants near the Duomo

But where to start? Here are some of our recommended restaurants to head to for any occasion and budget.

Bars near the Duomo

But Milan is more than just its food. Milan lives for its aperitivo. A sacred tradition like no other, Milanese gather at the end of the day to enjoy the simple pleasures of a crisp Aperol Spritz or similar and some nibbles to go along with it. Below are a few of the best places and terraces to have one around the Duomo:

Shops near the Duomo

And if you’re ready for some shopping, the area around the Duomo is the perfect place for it. We’ve rounded up some of the best stores, even if it’s just simple window shopping.

Thanks to a modern and speedy rail network, it's easy to reach Milan by train from all over Italy and even from other countries. Trenitalia and Italo operate high-speed services in Italy, which can whisk you from some of the most popular destinations to this beautiful city in no time. Travel from Rome to Milan in just under 3 hours, Florence to Milan in just over an hour and a half, or Venice to Milan in 2 hours.